Evelyn David (i.e. Marian and I) attended two book festivals this month. I went to the one in Duncan, Oklahoma on September 18 and Marian went to Toms River, New Jersey on September 25th. These events were wonderful opportunities for both of us to connect with old and future readers of the Sullivan Investigation Mystery series. I'll let her tell you about the New Jersey event in upcoming blogs.

I attended The Chisholm Trail Book Festival in Duncan. This was my first trip to Duncan and it was about a 3 1/2 hour drive from my home in Muskogee. I arrived about 4 pm on Friday, the 17th and checked into a hotel near the event location. The sponsors of the festival had invited all the authors to attend a dinner that evening at the Chisholm Trail Heritage Center. While waiting for dinner to be served, I avoided the sticky, 90 plus heat by touring the (fabulously air-conditioned) Heritage Center. The museum was a wonderful mix of prairie antiques and tv/movie memorabilia from iconic western films and series. One whole room was dedicated to Lonesome Dove, the book and tv miniseries. Large poster-sized stills from the mini-series covered the walls along with framed scripts and props. A flat screen television showed the movie in a continuous loop. I really wanted a Lonesome Dove coffee table book offered for sale in the gift store, but couldn't justify the cost. (And believe me I tried!)

The dinner was traditional cowboy fare - barbequed brisket, beans, fried potatoes, slaw, and biscuits - served from a chuck wagon. Live music was provided as we ate on a covered portico. Most of the authors present were from Oklahoma and Texas, and I used the dinner hour to catch up with old friends and make some new ones. The majority of the authors attending were historical, biographical, or Christian writers. They were very kind to let a mystery writer sit among them. 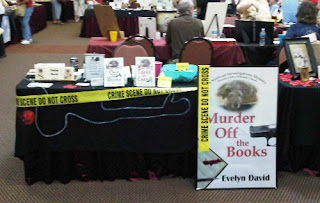 The next morning I had an hour to set up my table. The sponsors of the event had arranged for teens from the local school to help authors unload their cars and cart the materials into the event center. I can't tell you how impressed I was with this kindness. Four eighth-grade mystery fans helped me move boxes of books, framed poster, promo stuff, etc. from the parking lot to my assigned table. All of us had our hands full, so you can imagine how many trips it would have taken me to do it by myself.

A couple of hours after I settled in at my "crime scene"-themed table, I had to leave to present a workshop, "Clues to Writing a Mystery." My audience was a mix of teens and adults, all interested in the nuts and bolts (or should I say knives and guns?) of writing mysteries. Marian, who had reviewed my handouts for typos, had warned me I had enough material for a two-day class. She was right, but I was happy knowing I wouldn't run out of things to talk about.

While I was presenting the workshop, two of the young ladies who helped me earlier, manned my table, selling several books! I wish I had their help for all my events!

After lunch, which was sold conveniently right in the room where the book tables were located, I had a "mini-book-club" session. In other words, I read the opening scenes from Murder Off the Books. Reading aloud is not my favorite thing to do, but the audience was polite and clapped loudly when I finished a little early. They also asked lots of questions about publishers, agents, advances, and royalty payments. So maybe they weren't so much into the plot and my oratory skills. Sigh. I didn't mind though. I'm still new enough at this writing business to remember how confusing the publishing world was ... uh is.

FFA guys (Future Farmers of America) showed up to help me pack up my table and load my car. They were great! In fact the whole festival was incredibly "pro-author."

Rhonda
aka The Southern Half of Evelyn David
http://www.evelyndavid.com/
Posted by The Stiletto Gang at 5:00 AM