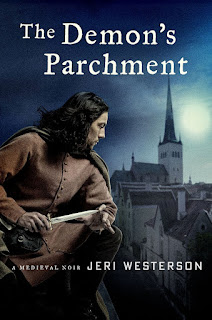 Noir and hard-boiled fiction seem to be in Jeri Westerson’s blood. She was born and bred on the mean streets of Los Angeles. Reporter, would-be actress, graphic artist; these are the things she spent her time on before creating the newest hardboiled detective, Crispin Guest—ex-knight turned PI, solving crimes on the mean streets of fourteenth century London in her Medieval Noir series. The Boston Globe called her detective, “A medieval Sam Spade, a tough guy who operates according to his own moral compass.” Her 2008 debut from St. Martin’s Press, VEIL OF LIES, garnered nominations for the Macavity Award for historical mystery and the Shamus Award for Best First PI novel. Her second, SERPENT IN THE THORNS, is also a 2010 Macavity finalist and a finalist for the 2010 Bruce Alexander Historical Mystery Award. Her third, THE DEMON’S PARCHMENT, is due for release October 12. Jeri is newsletter editor and on the board of directors for the southern California chapter of Mystery Writers of America and is president of the Orange County chapter of Sisters in Crime. She is also a member of Private Eye Writers of America and the Historical Novel Society.

Now I know it’s not your fault. Somewhere back in grade school you had a lousy history teacher who thought memorizing dates was more important than bringing history alive. But I was one of the lucky ones. Not only was I blessed with interesting history teachers, but I was also surrounded by a love of history at home, and to me, history was always something vibrant and exciting.

Most of us have so many erroneous ideas about certain time periods that we really have no grasp of the big picture of history. We find it hard to even place events on a timeline. For instance, in the 1200’s, the Inca empire in Peru was at its height as was the Aztec empire in Mexico, where they consumed much chocolate. At the same time in Europe—where they never heard of the New World, let alone chocolate--knights were heading off to the Middle East for the fourth crusade. And in China, the empire was ruled by the Sung Dynasty.

Not only were we taught boring history, but Eurocentric history.

There is the old saying by early 20th century philosopher George Santayana: "Those who cannot remember the past are condemned to repeat it." If one looks back at history, we see that this is true, from something as big as great battles to determine borders to small acts of simple interaction between people that grow into great tragedies.

One of the biggest problems is that our teachers never connected the dots of history that affected other events in other places. For instance, did you know that the Italian Christopher Columbus was sent by the Spanish Queen Isabella and King Ferdinand to find a new route to India? He wasn’t sailing to prove the world was round. Everyone already knew that, but I bet that was what you were taught in school. I bet you also thought that the big bad Church wanted to charge Columbus for heresy for claiming that the earth was round, right? Wrong! We can blame Washington Irving for that. The same fellow who gave us RIP VAN WINKLE and THE LEGEND OF SLEEPY HOLLOW, wrote a biography of Columbus in 1828, and he wrote a fictional scene wherein the Church wants to charge Columbus with heresy when the Church taught that the earth was flat—which, of course, it did no such thing. Teachers picked up on it, though, and for generations, school children believed that Columbus set out to prove the earth was round when everyone already knew this and never believed it was flat (Roger Bacon in the thirteenth century is quoted as saying, the “curvature of the earth explains why we see farther at higher elevations.” And don’t forget those paintings of Jesus holding an orb with a cross on top denoting his dominion over the earth. He’s holding an orb not a plate.)

But in 1492, Columbus was not the only one sailing the ocean blue. This was also the year that Queen Isabella and King Ferdinand were kicking out all the Jews of Spain…who probably funded this miraculous journey of Columbus in the first place. They weren’t the first country to get rid of their Jews, either. England expelled them in 1290. France had many expulsions, welcome-backs, expulsions again. It was either the Middle East for Jews or to Eastern Europe and even then they were relegated into ghettoes, by their own choice at first, then later by force. If we could have looked at this early part of Jewish history, we can see how old prejudices and expulsions led to the culmination of hatred in Germany during World War II.

In my latest novel, THE DEMON’S PARCHMENT, I explore medieval Jews and Crispin's perfectly medieval attitude toward them, along with a few Jewish legends like the Golem, the Jews’ mythological protector.

The history we learned in school is little connected to events that transpired later. In fact, unless you were a history major, you never really learn how event leads on to event—why Archduke Ferdinand of Austria’s assassination led to World War I, for instance, which was a direct link to World War II, and then, tangentially, the Holocaust. Look at all those veins of events that shaped America today! It’s a shame, really, because some of those happenings make for interesting tales indeed. And they still filter down to events today, lessons we should have learned from history long ago. 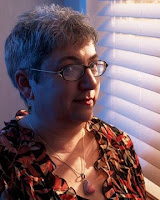 Jeri keeps her tales interesting in her Crispin Guest Medieval Noir novels. You can read a first chapter of her latest THE DEMON’S PARCHMENT, at http://www.jeriwesterson.com/.