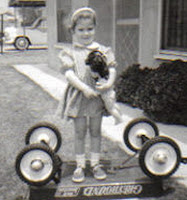 Can we talk hair this week? For years I did my own. Color. Trimming. I did it, myself. Of course I mostly wore my reddish brown hair in one long braid down my back so any mistakes were easily hidden.

Just before Murder Off the Books was published I decided I needed to do something with my hair; something that would leave the 70s behind and look good for book signings.

I made an appointment with a local hair salon. I told them I needed a cut, color, the works. I also warned them that I had long hair and to plan on slotting me in for more than 30 minutes. They assigned me a brand new hair stylist; I think she'd just been out of school a week or two.

Nicki, was about 20 years old, cute, and very soft-spoken. I was lulled into a false sense of security. Nicki talked softly, but knew which end of the scissors were which. She immediately, and in my own opinion with very little show of regret, cut off twelve inches and asked how much shorter I wanted to go. With my voice an octave higher than when I entered the salon, I advised that was far enough on a first date.

Nicki then took a hard look at my color. Coloring long hair at home is no easy feat. You've got to fashion an outfit from garbage bags, layer the bathroom floor with newspapers, and make sure you have plenty of alcohol (the rubbing kind) for clean up, and the other kind for afterward. Then you sort of massage the color into your hair, using clips to keep the uncolored from the colored, as you work your way around your head. I thought I'd been doing a really good job. Apparently not.

Nicki searched through the strands and asked which color I liked best, the dark brown ends, the lighter top where I have a few (very few) gray strands, or the middle part which had a kind of reddish cast to it. I shrugged. She waved a bunch of hair color samples in front of my face. She asked me to pick two that I liked; one light, one dark. I did. She said no. She picked two. One was kind of beige, the other was blonde. Nicki said those two colors would really lighten up my face. I hesitated. She countered with, "Just for the summer." Thinking back on it, I'm not sure why I agreed. It was January.

Nicki is an artist. She applied the color to my hair with a paint brush and with the same precision that I imagine the Masters used on their oil paintings. She did one color, then applied the second color to select strands. Ninety minutes later, I was caramelized. I also had enough foil on my head to get great TV reception.

Whatever nervousness I might have been feeling about the cut and the color, all disappeared after Nicki directed me to the shampoo room. Did I mention that Nicki is the best shampooer in the world? Total head and neck massage, no pulling, water temperature just right, perfect positioning of the towel under your neck, and she takes her time. Shampoos twice, then conditions.

My hair looked better than it ever had. The color was wonderful. The cost was in the same range as my car payment. I don't know if my face was looked lighter, but my mood was. The cost was worth every penny.

It's been just over a year now. I have to make my appointments with Nicki well in advance. She's very popular and she only works a few days a week. I've tried to interest her in my book, but she says she's not really into reading.

Email ThisBlogThis!Share to TwitterShare to FacebookShare to Pinterest
Labels: Evelyn David, Hair, Murder Off the Books