Too Much of a Good Thing ... is Filling My House

I’m Amy Alessio, a YA librarian and an author. I was delighted to meet half of the fabulous Evelyn David team at the Love is Murder conference. I told her to hurry up with the next book, and she suggested I help with a guest blog spot.

I have my own blog on Vintage Cookbooks to share my addiction to old cookbooks, and I have fun failing to make some of the old creations. (Think lots of lard.) I also blog for the Love is Murder conference and for Echelon Press’s Teen Scene.

Blogging is an excellent way to procrastinate writing my own fiction. I have some librarian books published and I have a short story published in The Heat of the Moment, an anthology by Echelon Press which benefits the victims of the CA wildfires (anthology pictured on the nightstand). My YA mystery is with an agent.

I read almost as voraciously as I eat baked goods. In addition to books I review for Teenreads.com and Crimespree magazine, I bring home several books a week from the library. To narrow it down, I love romance, mysteries, especially those with Chicago authors like Michael Black, J.A. Konrath, Tom Keevers and Julie Hyzy, fantasy, teen books, any kind of chick lit, anything with a librarian character or by a librarian, anything written up in People magazine, anything with food on the cover and maybe the occasional non-fiction. Cookbooks also of course.

This week I’ve had the flu, so I’ve been reading 3-4 books a day. Yes, even with my four year old at home some of those days. It’s amazing how much you can read during a Backyardigans episode. Sounds like a dream, right? One was a romance anthology on chocolate. Another was the new Carole Matthews Chocolate Lovers Club or something like that – it had to go back before I ate it. I also read Mary Kay Andrews’ new one about two cooks who fall in love, complete with tomato soup cake recipe. Yesterday I broke down and made a chocolate cake. Really – you can’t read that stuff forever and not eat something really naughty.

I’m also reading Kate MacAllister’s Aisling Grey series. I like the occasional paranormal romance, like a MaryJanice Davidson, or Jayne Ann Krentz/Jayne Castle (who used to be a librarian), but I think this is my first dragon series. These are great spicy fun. I think she’s writing mystery under a pseudonym too. Having a pseudonym is like waving a red flag in front of a librarian, by the way. We love tricky questions.

So you see it’s imperative that I have an entire library at home. On top of the nightstand is what I want to read soon. In the nightstand are my all time favs and autographed books. Under the bed are mainly YA I want to read less soon. Then – there are the 300 cookbooks. They are in 5 locations, that I can remember, in the house. Most of those cost very little at antique or used book stores. Who else would want a Blender or Meat Stretcher cookbook from 1970? 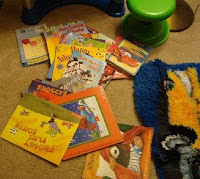 It’s interesting that while my son is adopted, he has similar book habits. Next to his bed is the first pile, photographed here. Then there’s the dresser and the bookshelf. He may have to clean them up soon, though – to make room for more of my cookbooks!

How many books are in your nightstand? Ok, now how many are hidden in your house?