Taking Comfort (Food) Where I Can Get It 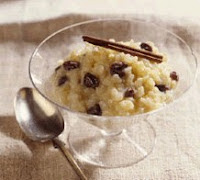 Finishing a book is like the 25th mile of a marathon…except I'm not looking for water to get me through that last chapter. I'm looking for rice pudding with raisins.

I don't think I realized just how fattening writing a book could be. Personally I think I ought to get caloric credit for all the running that Rachel Brenner, my protagonist, does. I mean I'm the one who cracks the whip and keeps Rachel in such good shape. Here's a woman who can whip up a pasta dinner for eight without breaking a sweat, keeps home-baked oatmeal cookies in her pantry, loves a good sauvignon blanc – and never seems to gain an ounce. So far she has no clear workout routine, although she does walk to work. Now I like to cook, I don't have a regular workout routine, and I too walk to work, although admittedly that's approximately ten feet, the distance from my bed to my computer. So how come I'm getting fat and Rachel isn't?

And the answer is: I'm a writer; Rachel is the makeup artist in a funeral home, apparently an aerobic profession. When not creating fictional murder and mayhem with the Southern half of Evelyn David, I write nonfiction books on everything from veteran's benefits to playgroups for toddlers. Apparently there aren't nearly as many calories as I thought moving your fingers over the keyboard.

But it's not only the sedentary life of a writer (and is that what attracted me to the career in the first place?) that packs on the pounds. Writers block, which can strike without warning at least twice a day, can only be cured by chocolate or rice pudding with raisins or in a pinch, Girl Scout Thin Mint cookies.

According to Wikipedia, "comfort food is typically inexpensive, uncomplicated, and easy to prepare…Small children often seem to latch on to a specific food or drink (in a way similar to a security blanket) and will repeatedly request it in high stress situations." I confess that it's been quite a few years since anyone considered me a small child, but I think trying to find fresh ways to create murder and mayhem definitely qualifies as a high stress situation.

Maybe that's why I've always liked the Nero Wolfe mysteries. Wolfe weighed one-seventh of a ton, which is just a Thin Mint away from 300 pounds. He understood that cerebral detecting requires a lot of calories. His dinners, prepared lovingly by Fritz the chef, always had at least four courses, including some divine dessert. I would be more than happy to chow down with Nero and sidekick Archie Goodwin. I'll pay for my meal by challenging them to figure out the killer in Murder Off the Books.

I've never known anyone, other than my mother-in-law, who considered carrot sticks a comfort food. Macaroni and cheese qualifies. So does tomato soup and grilled cheese sandwiches. Pudding of almost any flavor would also make the list.

Those are some of the foods that sustain me as I struggle to create memorable characters, laugh out loud humor, and a believable fictional world where the good guys always win. How about you? What are your comfort foods?