The Forgivenss of Whales by T.K. Thorne

Until recently, scientists thought humans were the only species with the specialty brain neurons responsible for higher cognitive functions like self-awareness, a sense of compassion and language.

Fifteen million years before humans, whales began evolving these special cells*, and now a strange phenomenon is occurring off the Baja coast of Mexico.

Humans have been slaughtering Pacific whales there for a long time, first with harpoons, now with sonar from Navy ships. Whales live a long time, up to a hundred years. Some whales alive today still bear the scars of harpoons. Many scientists believe that it is implausible to think the whales do not remember this or associate humans with death and anguish. 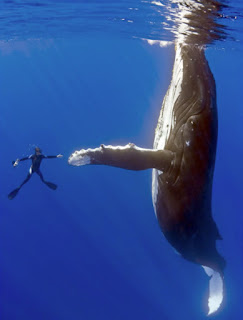 Yet, in the same area where humans hunted them nearly to extinction, then tortured them with sonar, whales are approaching humans and initiating contact. A  N.Y. Times article detailed the experiences of the reporter and the stories of locals who tell about mother whales approaching their boats, sometimes swimming under it and lifting it, then setting it gently down. Almost all the stories involve the whale surfacing, rolling onto its side to watch the humans–reminiscent of the surreal moment in the movie, Cast Away, when a whale rises from the night sea to regard Tom Hanks with an eye cupped with starlight, an eerie intelligence, and a gentleness that moves us, for we know the massive creature could kill the castaway with a nudge or a flick of a tail fluke.

These real grey whales off Baja swim close enough that people invariably reach out to touch them, and they allow it. One person, reflecting on the experience said, “I have never felt more beheld.” It seems reasonable–given the position the whales place themselves in–that they seek the contact. In many cases, a mother whale will allow her calf to do the same. There is no food involved in these exchanges, only a brief interlude of inter-species contact and rudimentary communication:  I come as friend.

Where will humans be in another hundred years? I suspect we will be technologically advanced, but emotionally pretty much the same, even in a thousand years or ten thousand. But what about a million years? Can we evolve (if we survive) to a more sane, more rational, more loving species with a broader sense of our place in the universe and in life itself? Is it possible that these creatures with 15 million years of intelligent evolution on us, might regard us as a young species, children who don’t really know better,  and grant us leeway for our mistakes? Grant us . . . forgiveness?

If we humans could only do such a thing!  Beat our swords into ploughshares, at least among ourselves. It’s unlikely, but we might yet be targeted by alien invaders, so we shouldn’t throw away all of our weapons. Even whales have enemies, and they do not hesitate to defend themselves when attacked and even take the battle to the enemy! Recently, there are increasing reports of whales, specifically humpbacks, who are defending not only their own against attacks of orcas, but other mammals, such as other whales, sea lions, fur seals or walruses. They only attack mammal-eating killer whales, not orcas that primarily feed on fish. They feed and fight in a coordinated manner, communicating with each other.

There is proof that we humans are capable of realizing the power of peaceful cooperation and partnerships. Not long ago, for example, a team of over 2,000 scientists representing six countries worked to determine the human genome, all 3 billion parts, and then made that data freely available on the Web.

Perhaps one day we will stop slaughtering the fellow creatures on this blue-and-cream jewel that is our world; perhaps we will make friends and share discoveries, meeting whales on the mutual ground (or sea) of respect.

Our survival may depend on it.

*New research is indicating that glial cells may be responsible for imagination, creativity and probably play a role in consciousness. Einstein’s brain had an abundance of these cells, especially in the area responsible for spacial awareness and mathematics. Mice injected with human glial cells became 4x smarter. Glial cells can communicate with each other (via calcium waves) and with neurons, even signalling neurons to fire. Although whales don’t have all the “levels” of a human brain (and so their thought processes are probably distinctly different), whales have a much higher ratio of glial cells to neurons than humans in the neocortex, the area thought to be responsible for intelligence.