Lydia and the Role of Women


Lydia Rees, wife of my detective Will Rees, is an opinionated and outspoken woman and an equal partner with her husband as they investigate murders and other crimes. This is not so surprising for modern times but during the eighteenth and nineteenth centuries a woman had no legal status. She owned nothing and in fact she herself was chattel, belonging first to her father and then to her husband. The portion she brought to her marriage belonged to her husband and literally everything she had, including her children and the clothes on her back, belonged to him. In one of the primary sources I read a woman divorced one man for another and had to marry in her shift. The clothing she wore belonged to husband number one and he wanted it back. Fortunately, husband number two had clothing waiting for her and as soon as they were married she dressed. 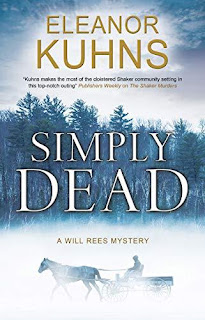 A woman could not inherit the family home unless her husband specifically named her in the will. If he did not, she became the burden of her eldest son. If they had a bad relationship he could, and did, at least according to some of the histories I’ve seen, put her out to make her own way on the road.


This did not mean that women did nothing. Oh no. This was an agrarian world and a man could not run his farm without his wife’s labor. Farm wives kept a garden, made butter and cheese, cooked, sewed clothing, cleaned – and all of this at the same time they dealt with pregnancy and minded their children. Wives of printers and other professional men frequently helped in the shop. It is no wonder that many men from this time are buried with two, three or sometimes more wives.


Lydia is a former Shaker (or The United Society of Believers in Christ’s Second Coming to give them their proper name. Shakers was at first a derogatory nickname based on their physical services – it is a combination of ‘Shaking Quakers’.) The Shakers were a faith begun by a woman, Mother Ann Lee, and the Shaker Sisters have equal authority with their male counterparts. There are two Elders and two Eldresses, two Deacons and two Deaconesses for every Family. Although the work was assigned along traditional gender roles, women and their labor were considered of equal importance. And in a time when illiteracy among woman was high (even among men it was almost 50%), the Shakers educated the girls equally with the boys. (Girls went to school during the summer, boys during the winter.) So Lydia expects to have a say.


In Simply Dead, one of my women characters flees to the Shakers to escape a life of servitude to her family.Obedience to the rules and celibacy, however, both come with membership in this faith. When Lydia secretly marries her first husband, Charles Ellis, and bears a baby she is immediately expelled from the Shakers. Ellis’s unexpected death causes further legal complications.


When a person joined the Shakers, he or she signed a document called the Covenant. In it, they agreed to surrender all their worldly goods to the community. Charles Ellis is almost a member of Zion; he has not yet signed the Covenant, but everyone is expecting him to. Then he dies. Because Ellis leaves his farm to Lydia in his will, the farm the Shakers were expecting to own, she inherits.  When she marries Will Rees, the farm immediately becomes his.


Although Lydia wishes to abide by her first husband’s wishes and surrender the farm to the Shakers, Rees hesitates. Fortunately for the family. When they are forced to flee their home in Dugard, they take refuge in the farm near Zion. (The Devil’s Cold Dish).In Simply Dead and in the next few books after, the situation is still not resolved.  I find this a fascinating problem – and it all revolves around Lydia and her status as wife (twice), Shaker and widow.
~~~~~~~

Eleanor Kuhns is the 2011 winner of the Minotaur Books/Mystery Writers of America First Crime Novel.           A lifelong librarian, she received her Masters from Columbia University and is currently the Assistant Director of the Goshen Public Library in Orange County New York.