Travel: A Path to World Peace

By Barbara Plum aka AB Plum

"Travel is fatal to prejudice, bigotry, and narrow-mindedness …"  (Innocents Abroad)

On the other hand, there's no place like home.

After a summer of living in Denmark, with side trips to Iceland, Scotland, Finland, and Estonia, I boarded what I hoped was my last airplane for a while on August 31. We stood in line to clear security at Kastrup, and I wondered if any other country besides our Scandinavian haven had withstood such an onslaught of tourists.

Despite the hordes—and my being patted down at the airport—the multitudes and I proceeded to our flights without incident. Standing in front of Customs, I felt a frisson of tension. (We learned before departing the US that Iceland is part of the Schengen Area).

This Agreement allows people and goods to cross 26 EU borders without visas or other kinds of border controls. US citizens can remain in the entire area a total of 90 days within a 180-day period. Pretty straight forward. (My husband traveled on his Danish passport and so avoided the "rules).

I knew about the restrictions before leaving the US on May 27 for Iceland. Iceland is part of the Schengen Agreement. Six days there before going to Denmark meant I would exceed the 90-day allotment. I called the Danish Consulate near my home in late April and got the reassurance that I could go to any police station in Denmark and receive an extension of my 90 days.

Once upon a time, yes. In June 2019 … I had to go to Danish Immigration with a long form filled out by my husband's lawyer-cousin. The clerks who handled my request warned us I would very likely have my request rejected. (About a hundred people—Mid-Eastern women, mostly, with small kids and babies—queued up to other lines to submit their papers). I never learned the outcome of their petitions, but I realized my extension mattered nothing compared to immigrants seeking asylum.

Ever optimistic about my own case, I thought playing the "family" card would over-ride bureaucracy. Family is a very big deal in Denmark. My husband's family had planned a major reunion for us and dozens of cousins on August 25. Our adult kids were coming from the US to take part in the festivities. Et cetera. Et cetera. Etc. …

Nothing personal … and no narrow-mindedness … just the rules …

In less than a week, we received the official word, delivered by Priority Mail. I had to leave on the 24th or risk a hefty fine and exclusion from the EU for an unspecified time if I violated the rules.

A trip to the American Embassy resulted in no hope. Naively, I assumed someone in the US Embassy would take up my case. Denmark, I learned, now has some of the strictest immigration policies in Europe. And no, I could expect no help from US personnel.

A light shone at the end of the tunnel though. One loophole existed. I could leave Denmark for 6 days (the number by which I would exceed my stay) and then return to Denmark, giving me a total of 90 days in the country.

The UK or Croatia. Or, of course, back to the States. Choices, choices.
Brexit mania was all over the European news in mid-July. Did I really want to go to London under those circumstances?

After five minutes of discussion about cheaper airfares, shorter flights, and another visit to Croatia, my husband and I chose Scotland for our sojourn. I'd always wanted to tip-toe through the heather—if I could visit during a rain-free period.

Raindrops keep dancin' on my head …

Sunshine shone on us every day except for our bus trip to Stirling to visit the castle. Since we'd enjoyed perfect weather at Edinburgh Castle, we didn't complain. Dozens of Scotsmen told us how lucky we were not to have to resort to rain-gear, and we agreed.

Our six days in Edinburg flew by. We missed the heatwave that hit the week after we left, and we returned to Copenhagen almost glad for the need to make the side trip.

And yes, we tried haggis—almost edible with a couple of cold local beers.

Our trips to Finland and Estonia, planned before our imposed trip to Scotland, proved uneventful. Great weather. Manageable crowds. Quiet and relaxing.

By the last week of August, despite an amazing summer, we were ready to go home on the 31st.  An eleven-hour flight lay ahead of us so we decided to check for lounge availability and pay for a more quiet place to relax before takeoff. Pay, because Norwegian Air no longer provided free lounge entrance for Premium passengers. If we upgraded to Premium-Plus status, then we could stay for the 2-hour wait time for free. Another thousand dollars seemed excessive …

As we checked with the desk attendant regarding available space, she told us the charge would be $40 each.  We hesitated. Then, a young woman behind us, offered to make us her guests. Surprised, but quite happy, we accepted. We thanked her and discovered she'd grown up in Silicon Valley. She now lives in Boston, but the world is a small place.

We settled in with coffee and comfy chairs and marveled at our good luck. "Travel [really] is fatal to prejudice, bigotry, and narrow-mindedness."

How about you. Do your travel experiences support Twain's statement?
*******
When not traveling the world, Barbara Plum and her alter ego, AB Plum, live in Silicon Valley. Her latest romantic comedy, Crazy Daze and a Knight is available FREE through Thursday. 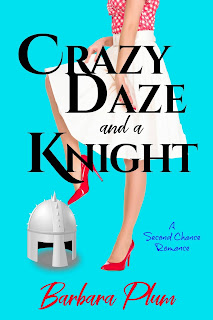