Oh Where, Oh Where has my launch gone? by Debra H. Goldstein 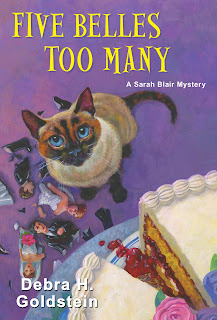 Oh Where, Oh Where has my launch gone? by Debra H. Goldstein

June 28 is the release date from Kensington of my fifth Sarah Blair novel, Five Belles Too Many. As I write this blog, three days before it will appear on the Stiletto Gang blog, I have yet to confirm a physical launch location (which would be in mid-July). That’s unusual for me.

When One Taste Too Many, the first book in the series, was published, there was a table at Barnes & Noble at the Summit in Birmingham and not only did I have the initial signing there, but two nights later, I had an indie signing at Little Professor. Both were successes and the events were repeated when Two Bites Too Many was released. And then, a few weeks later, after I had additional live signings in Alabama, as well as in California, Arizona, Georgia, Tennessee, Texas, and Colorado, the world shut down because of Covid. 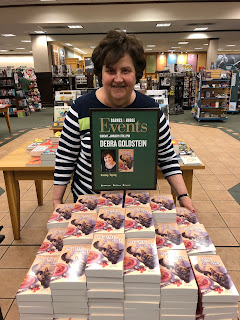 release, but we definitely were by the time Three Treats Too Many and Four Cuts Too Many were published. I crisscrossed the country doing zoom presentations. It wasn’t the same as being able to sign books live for readers, but it did give me an opportunity to partner with writers I adore from other parts of the country for the same presentation. I was sure by the time, Five Belles was published, I’d be able to have a launch similar to my first ones, but that isn’t the case.

B&N in my area of the world has not returned to live signings. Our indies are beginning to do events, but with certain health protocols still being followed. I am in limbo. I’m ready to meet fans in person again, but I’m not jumping through hoops to make the live signing happen. Instead, I’m taking a step back and watching and waiting, figuring the official live launch may be replaced by smaller bookstore gatherings in July and August.

In one way, it is a shame. Five Belles Too Many is my second favorite book in the series. In it, Sarah is forced to chaperone her mother when Maybelle is a finalist to win the perfect Southern wedding. When the reality TV show’s producer is found dead with Sarah’s greatest nemesis kneeling by the body, Sarah must find the true killer before any more of the contestants or crew are permanently eliminated. 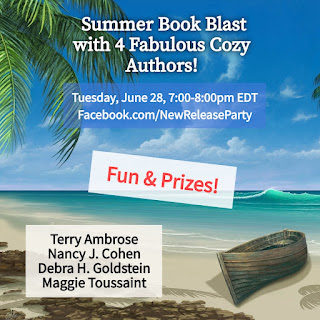 Because of the humor and nature of the book it would be fun to interact with a live audience, but that’s not to be. In the meantime, I’m going ahead with virtual plans, including a takeover of Joanna Slan’s Readers on June 20 and an incredibly special Summer Blast/New Release Party with three other cozy authors, Terry Ambrose, Maggie Toussaint/Volana Jones, and Nancy J. Cohen, on June 28 from 7-8 EST. I’ll also be participating in a Great Escapes Tour (June 17-30) and visiting other blogs including The Wickeds, Jungle Red Writers, Chicks on the Case, Dru’s Book Musings, and Mystery Lovers Kitchen. The fun part of the parties and blogs for readers is that there will be plenty of prizes to be won. I’ll also be offering additional prizes if you are a newsletter subscriber (you can sign up on my website – https://www.DebraHGoldstein.com ).

For more chances to read reviews, win prizes, and find out how Five Belles is taking off, don’t forget to visit me on:

Or, make my day by pre-ordering a copy of Five Belles Too Many from Amazon, Barnes & Noble, or your favorite indie bookstore. We’ll call it being part of the silent launch.

How do you feel about not having as many live signings?