I lift weights. Twice a week my husband and I go to the gym. The nutritionist at the army health clinic told me about the weight training room. She said as we age it is important to do weight bearing exercises to keep our bones strong and joints limber. “Just go twice a week. Go in the middle of the day – there’s no one there at that time.”

Another year passed before I went. The catalyst was my annual cholesterol check. I begged for 6 months of diet and lifestyle changes before going on medication. Thus, the gym - and less wine and more veggies.

But there is another reason I started lifting weights. I had become weak. When I travel to give quilt presentations, I bring multiple suitcases stuffed with quilts, pushing the airlines 50-pound weight limit with those big bags. The check-in agent, eyeing my bags, would say, “put that up here” motioning with their chin to the scale. I’d laugh and say, “It’s not over 50 pounds because I can’t lift 50 pounds.” Each spring, when my travel season began it was true, I couldn’t lift 50 pounds, but as the trips added up, I could feel myself getting stronger. Yes, that may have been me holding up the line while pulling items from an overweight suitcase and stuffing them in my carry-on. Just by handling those heavy bags I became stronger. Strong enough to lift more than 50 pounds by the end of the season. 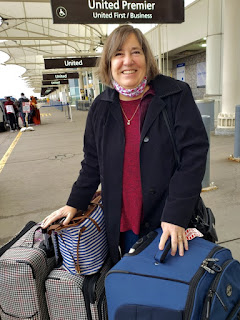 Then came Covid-19 and my work became a series of Zoom presentations. And I grew weak.

When my travels resumed, I lifted my bag onto the scale that first trip and it was heavy! I was visualizing what I could move to my carry-on bag just as the scale settled on 43 pounds. Only 43 pounds? I quickly moved shoes and jeans from my carry-on to the checked bag. That’s because I have another problem once I board the plane – getting my carry-on in the overhead bin. My rule is, if I can’t lift it myself, I must check it. But I’m 5’3” and it’s not a matter of strength as much as a matter of height. (At least that’s what I always tell the nice tall man in the aisle seat who jumps up to help me!)

The army gym is not a flashy place. It’s old, and kind of run down. I wish someone would sweep the floor. It’s often only the two of us there. It’s quiet, almost meditative. But when soldiers come in the atmosphere changes. They are young, and strong, and physically fit. They sweat and grunt and the weights come clanging down as they finish their routines. There’s a demand for the best machines and a polite toe taping or pacing when they must wait. Among the most popular machines is the leg press – it's for the quads and glutes. I like it. And the sit up machine. I like it too. And there is the Graviton machine. It’s meant to condition your arms to do pull ups. I can’t do a pull up. I’m not sure this machine can even help me get there. But I do it. Every time. 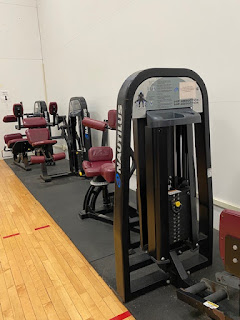 There is a less popular machine called the Overhead Press. My husband skips it. He explained, “I don’t think there is much benefit in that machine.” I said, “I hate this machine.” He asked, “Then why do you do it?” I said, “Watch my arms.” I lifted the weights over my head. He watched. I lowered the weights and said, “It’s the muscles used to put my carry-on in the overhead bin.” 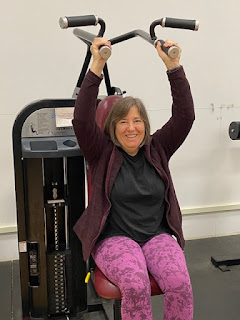 The gym, even on the slowest days, is a good place to shop for character traits. There’s another older couple who come in wearing street clothes, and each do a few machines, talking the entire time. Their workout takes 10 minutes. Should that even count as a workout? Who am I to judge?

And there is a young woman who runs on the treadmill in the cardio room before lifting weights. Her dark hair is pulled back in a bouncy ponytail. I like following her on the weight circuit because she is my height, so our settings are the same.  I don’t know anything about her but in my writer’s mind she is an Army lawyer. She runs fast and lifts fast and is very focused.

And there is a group of firefighters from the post fire station. They move from machine to machine keeping their hand radios within reach. Their big red firetruck is just outside the gym parked along the curb, ready to go at a moment's notice. One of them wears a bandanna around his head, Karate Kid style. Another harasses his buddy to speed it up on the Biceps machine. His buddy's response is to go slower.

And my favorite, the retired marine whose shaved head glistens with sweat when he works out. He looks intimidating – all muscle and sinew. He only does three machines but with many reps and huge stacks of weights. One day I asked him, “Do you alternate upper body and lower body workouts?” He smiled. Maybe you’ve heard the term ‘resting bitch face’? This guy has resting ‘fierce face’. He looks scary. But when the marine smiles his face will melt your heart a little. He shows his bright white teeth, his double dimples dimple and the deep creases in his forehead relax. And over that one question we became friends. He took me to the free weight room down the hall and taught me how to use a standing machine for an intense abs’ workout. He said, “You are a little short, but you are doing it perfectly.” He told me it’s easy to talk yourself into skipping the gym, like 90% of the people he knows. With that gorgeous grin he added, “Now if only I had a refrigerator that automatically locked at 6 pm, I’d be in good shape!” 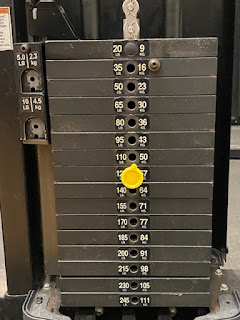 I lift weights. I’m getting stronger and my character file is growing. What's your favorite place to shop for characters?

Barbara J. Eikmeier is a quilter, writer, student of quilt history, and lover of small-town America. Raised on a dairy farm in California, she enjoys placing her characters in rural communities.

Posted by Barb Eikmeier at 2:00 AM