A Nod to Writers and Artists

In every novel of my Nikki Garcia mystery series, I’ve mentioned a writer or a visual artist whose work I admire. Since my mysteries are set in foreign countries, this detail adds a touch of that country’s culture.

Waking Up in Medellin takes place in Colombia and I wove in the works of Gabriel Garcia Marquez, Nobel Laurette in Literature for One Hundred Years of Solitude, and the sculptures of Fernando Botero into the story.

Danger in the Coyote Zone takes place in Mexico and I mentioned Leonora Carrington, a British woman who lived and worked among the surrealists in Paris and moved to Mexico to escape the ravishes of World War II. She remained in Mexico, married the Hungarian-born photographer Emerico Weisz, and lived in Mexico City for the rest of her life. Leonora infused her surrealist paintings and sculptures with a feminine perspective, and she played an important role in the women’s rights movement in Mexico. In my novel, I only mention that Nikki notices one of her surreal sculptures on a street in San Miguel de Allende. To my amazement, I received an email from Wendy Weisz, Leonora’s daughter-in-law. Wendy had read my first novel in the series and had purchased the second one too. She was pleasantly surprised to find the mention of her late mother-in-law’s sculpture. Hearing from her was thrilling to me, especially since I’ve never met anyone in the Weisz family though I’ve always admired Leonora’s art and sculpture.

Revenge in Barcelona includes action scenes that occur at Gaudi’s architectural sites, such as the world famous Sagrada Familia Basilica. Not only did I research Gaudi’s work, but also I made two trips to Barcelona to make certain I had the facts right. (That Barcelona is my favorite city in the world did not influence my decision to travel there to fact check!)

While writing Missing in Miami, I took a slightly different approach. I’d read Klara and the Sun by Ishiguro. Josie, Ishiguro’s character, suffers from an illness that is never fully defined. My character Andrea, the missing girl in my novel, also has an illness. I mentioned Ishiguro’s novel despite his lack of ties to Cuba to subliminally correlate his Josie to my Andrea. I never mention Ishiguro’s character or her illness so I don’t expect many readers to catch the comparison unless they’ve read both novels.

I’m currently writing a novel about a math prodigy. In it I’ve mentioned Miguel de Cervantes and his picaresque novel, Don Quixote de la Mancha. It’s prompted me to reread the adventures of Don Quixote and Sancho Panza, a novel I love despite the fact it was written in the early 1700s.

Do you incorporate allusions, a nod, or direct references in your novels to either writers or their work? 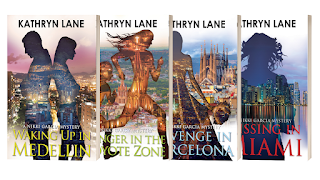 Kathryn Lane started out painting in oils and quickly became a starving artist. To earn a living, she became a certified public accountant and embarked on a career in international finance with a major multinational corporation. After two decades, she left the corporate world to plunge into writing mystery and suspense thrillers. In her stories, Kathryn draws deeply from her Mexican background as well as her travels in over ninety countries.

All photographs are used in an editorial and/or educational manner

Klara and the Sun - Amazon