Pumping My Own Gas and Other Firsts 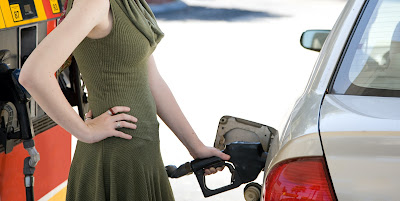 By Lois Winston
It’s official. This Jersey Girl is no longer a Jersey Girl. I have the Tennessee driver’s license and license plate to prove it. And it’s a very strange feeling. For one thing, I now have to pump my own gas, something I could previously only do when driving out-of-state. I think it’s been about ten years since I last used a gas pump. New Jersey has a weird law that doesn’t allow ordinary citizens to fill their own gas tanks. Even if you happen to be the person who invented the modern gas pump, you have to leave the filling to the attendant. Oregon is the only other state that doesn’t allow you to pump your own gas. What century are we living in?

It’s been so long since I pumped my own gas that on the drive down to Tennessee, I first grabbed the diesel nozzle. Luckily, they’re designed in such a way that you can’t accidentally fill your tank with diesel if you don’t drive a diesel automobile, but it took me a minute or two to figure out why I couldn’t get the nozzle into the gas tank. Then I managed to dribble gasoline on my hand and shoe. This experience will definitely go into a book at some point. It’s the author’s way of turning lemons into lemonade.

I’m experiencing many more firsts with this move. Our new home is the newest house we’ve ever owned, only seventeen years old. Prior to this, our newest house was built in 1939. The oldest was built in 1893. And the first home we ever bought was a Sears house kit. (No, we didn’t buy the kit from Sears. I’m not that old!)

This is the first house I’ve ever lived in without a basement. Even as an apartment-dwelling city kid, we had a basement. But this is also the first house with an attached two-car garage. I think I’m going to like that, if I can navigate in and out without sideswiping either my husband’s car or the garage wall.

There are many things I’m going to miss about living in New Jersey—being so close to Manhattan theaters and museums, living less than an hour from the ocean, being able to walk to shopping, instead of having to jump in the car for every errand. And some really good friends.

However, I’m certainly not going to miss snowstorms and the power outages they generally entailed. I did suffer through a four-day outage a few summers ago while visiting family in Nashville, but it was nothing compared to the nine day-outage we endured during Superstorm Sandy and the freak early snowstorm that followed, or the countless blizzards and Nor’easters that have brought down power lines over the years.

If the power goes out in the summer, you can walk around the house in your underwear or a bathing suit and cook your meals outside on the grill. It’s far worse to wear seventeen layers of clothing indoors and have to shovel your way through three-foot high snow drifts to get to that grill in winter.

I’m also looking forward to making new friends and exploring my new state—once all the cartons are unpacked. I’m just not sure I’ll ever make the leap to saying, “Y’all.”