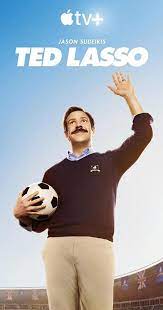 I don’t remember what finally enticed me to watch the first season of Ted Lasso (a sitcom created for Apple TV+). The premise of an American college football coach with no soccer experience hired to manage a premiere professional British football (aka soccer) team seemed intriguing. Hearing about Jason Sudeikis’ Golden Globe winning performance in the title role piqued my curiosity. Maybe the deciding factor came from reading about how good natured, optimistic, and hopeful the program was. I had been looking for a “feel good” series to binge, and Ted Lasso, with 10 half hour episodes, seemed worthy.

What I discovered in watching it, much like the character of reporter Trent Crim who shadows Ted for a day learns, is that there is more to Ted than a joke. Ted may not know the sport, but he is a very capable coach, not only for the team, but for everyone he encounters.

The twist upon which the show develops is that Ted has been hired to fail. The new owner, Rebecca Welton, acquired the team in her divorce settlement. She knows it’s the only thing her ex-husband really cares about and she systematically plans to destroy it. She doesn’t care who she has to hurt in the process, as long as she can cause her ex pain.

Does Ted know or suspect he’s a pawn in a bigger scheme? That’s a good question, particularly after watching the episodes several times. There’s a lot of subtext and characters are not what they initially seem. Or, maybe they grow, under Ted’s good-natured influence.

Because Ted really is Pollyanna. He finds something meaningful and worthwhile in every situation he encounters, even those most devastating for himself. He’s both wide-eyed and wise at the same time.

He has a quiet exuberance that’s contagious. He wins people over even when they are determined to dismiss him. That’s difficult to achieve and to make convincing for jaded readers. Part of how it’s accomplished is that Ted doesn’t have a completely charmed life. He comes to Britain to give himself and his family a new start, but it doesn’t work out as he hopes it might. He has to deal with personal disappointment while trying to accomplish the impossible (reinvigorating the team) and having his boss actively plotting against him.

As a writer, what I found most delightful about Ted Lasso is that almost every character, no matter how briefly introduced, has a story arc. Each person grows, learns, changes, becomes more or less assertive, and happily reaches his or her place in the overall structure. Even those walk-ons have their moments. Just like what Ted tries to provide for his players.

One other interesting aspect is how much a “family” operation Ted Lasso seems to be. Jason Sudeikis and Brendan Hunt, who plays the assistant coach, helped develop the show. Brett Goldstein, who takes on the role of grumpy, aging team captain Roy Kent, is the chief writer and Phoebe Walsh, who appears as the assistant coach’s love interest, is also on the writing staff. Character names are drawn from show insiders (Roy’s niece is Phoebe and Keeley Jones, a character portrayed by Juno Temple, has the first name of Keeley Hazell, who has the minor part of Bex and dates Sudeikis). Higgins, the beleaguered and unwilling henchman for the new owner, is transformed by music. The actor playing the part, Jeremy Swift, is also a musician and composer.

Best of all, being good and kind wins out, not in a cloying or sentimental way, but even when the opposite path would be perfectly plausible. Respect for others, despite their differences, becomes the theme. Seeing that it can be accomplished without losing self-confidence or dignity makes for a truly winning first season. I anxiously anticipate seasons two and three!