Hollywood film director Quentin Tarantino is known for his over-the-top movies, especially in the violence department. Although I’m a fan of his talent, I don’t enjoy his excessive use of violence so I skip some of his pictures. But the latest one—ONCE UPON A TIME IN HOLLYWOOD—I did rush to see this year.
Sure, it offers Brad Pitt and Leonardo DiCaprio in lead roles—plus it's set in La La Land. 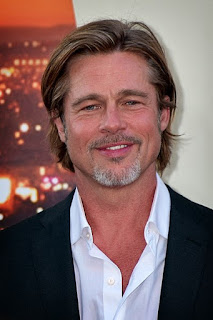 Those are draws, but it's the time period that really hooks me. The film opens in August 1969. Brad and Leonardo play great buddies. We see them on film sets and at their respective pads.  Real life actress Sharon Tate (played by Margot Robbie) is a next door neighbor of Leonardo. Eventually Brad runs across the Manson family of murderers. Violence does ensue, naturally, but there's a neat twist at the end that makes the viciousness more satisfying than usual.
Now, it so happens I have more than a passing familiarity with that time frame. My second book in the Austin Starr mystery series also takes place then.  RAINY DAY WOMEN opens during the week of the Manson murders and Woodstock, and the era is seething with menace.
Some friends called me up to say, “Hey, didn’t you use that stuff as a backdrop?”
Yes indeed, I did.
In my book, intrepid amateur sleuth Austin Starr, with her infant in tow, flies across the continent to support a friend suspected of murdering women's liberation activists in Seattle and Vancouver. Then her former CIA trainer warns that an old enemy has contracted a hit on her. Her anxious husband demands that she give up her quest and fly back to him. How much should Austin risk when tracking the killer puts her and her baby's life in danger?
While I don’t offer a gory ending to my tale—with body parts flying through the air, a la Tarantino—I do promise you a  most satisfying story that earns 4.5 stars on Amazon. Why not take a look? https://www.amazon.com/Rainy-Day-Women-Kay-Kendall/dp/1941071171/
PS. I’ve got to add that Brat Pitt is past due for his own Oscar for Best Actor. If I were a member of the Academy of Motion Picture Arts and Sciences, Brat would get my vote.
~~~~~~~
Author Kay Kendall is passionate about historical mysteries. 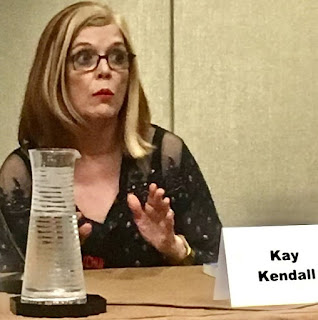 She lives in Texas with her Canadian husband, three house rabbits, and spaniel Wills. Her second book Rainy Day Women won the Silver Falchion for best mystery at Killer Nashville. Visit Kay at her website http://www.austinstarr.com/
or on Facebook  https://www.facebook.com/KayKendallAuthor
Posted by kk at 3:30 AM