Last week my third mystery launched. My book’s birthday plus my own made it a stellar week. I can’t give you a piece of birthday cake, so here’s a song for you.
Fiona Apple sings “After You’ve Gone.”
https://www.youtube.com/watch?v=FH3tvv-qnrI 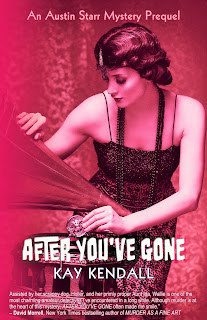 The song was penned in 1918, remaining popular throughout the next several decades—especially during the 1920s, which is what I was looking for. Even in the last 30 years many singers have covered it. Frank Sinatra, Ella Fitzgerald, Edie Gourmet, and many more. In truth, the song is fantastic. Singing styles change, but the song holds up. For comparison, here's a performance fro 1927 by a star of that era, Ruth Etting. https://www.youtube.com/watch?v=fjgBara7N88
All my mysteries take their titles from popular songs. My first two are Desolation Row and Rainy Day Women. But because this new book takes place in 1923, I can hardly use another Bob Dylan song, can I?
Copyright laws don’t cover song titles, but lyrics are. While Dylan’s are still protected, “After You’ve Gone” is no longer under copyright. These words from the chorus fit the storyline of my new mystery.
After you’ve gone and left me crying
After you’ve gone there’s no denying,
You’ll feel blue, you’ll feel sad,
You’ll miss the bestest pal you’ve ever had.
There’ll come a time, now don’t forget it,
There’ll come a time, when you’ll regret it.
Oh! Babe, think what you’re doing.
You know my love for you will drive me to ruin,
After you’ve gone,
After you’ve gone away, away.


When you read my new mystery, you’ll see how many characters must carry on after someone has gone—someone very near and dear to them. The biggest loss of all kicks off the mystery, of course. But there are others—oh so many others. Just count them all up. You’ll see.

Author Kay Kendall is passionate about historical mysteries.  She lives in Texas with her Canadian husband, three house rabbits, and spaniel Wills. Visit Kay at her website  http://www.austinstarr.com/   or on Facebook  https://www.facebook.com/KayKendallAuthor