Thirteen going on Thirty the 70's

Several of my comadres have asked me, "How did you learn how to write?" Sometimes they ask about getting published. I tell them, "First read lots and lots of books about whatever interests you. Listen to different genres of music, go for long walks and listen to the sounds of nature...Then study the craft of writing in the genre you've chosen: Memoir, fiction, history, science, poetry, screenplays...Then begin writing every day and write about four pages a day, every day. Write about anything and everything and write non-stop for at least five minutes a session. Free writing about whatever is in your head. That way you get rid of the bullshit. And there's lots of bullshit in your head, believe me.


Today I'm sixty years old and losing my mind and my memory. Both at the same time. But I have no complaints. I'm happier than I've ever been. I have a husband who loves me and makes me laugh when he sings and dances. He is fearless. He is a warrior. He is a feminist.

My son, turned forty-five. I'm sixty. Do the math. It's a miracle, a miraculous conception of a naïve teenager with beautiful hair and eyes. My beauty was a curse. My loveliness a sorrow. I became a teenager in the seventies. I became a mother during the feminist movement and so my son is also a feminist. And he didn't know what the definition was until today when I asked if he knew the meaning of the word, feminist, feminism...femme fatale. And he answered honestly, no. So I schooled him. I told him his grandfather, my father, was a feminist. My husband is also a feminist. And that he is a feminist. He just nodded his head and smiled.


I have no reason to be unhappy, but sometimes I miss my sisters, parents, abuelitos, tiós, madrinas, teachers, friends, ancestors. I write because if I don't tell my story, who will. Y, que? I've had such great teachers, mentors, writer colleagues, writing workshops; I want to share what I've learned with you. 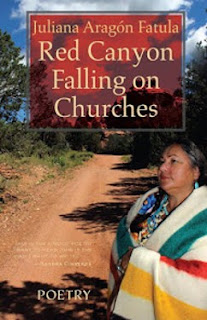 My second book of poetry.
https://www.bowerhousebooks.com/team/juliana-aragon-fatula/