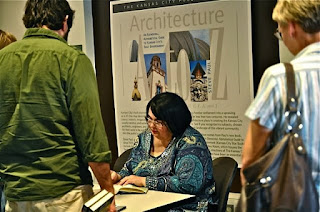 I had a dream for many decades, a dream that I would write novels that would be published by a major publisher to great reviews and win many honors and, most of all, find readers who loved them. And for many years I had to put that dream on hold for lack of time as I worked a demanding and fulfilling job while raising a family. I still wrote whenever I could and still had my dream.

Poetry was shorter so I started writing poetry in those bits and pieces of time I could steal, and eventually some was published and then more. Finally, I had two books of poetry published to good reviews and even some awards. I was happy, but… I wanted to write novels, too.

Ultimately, I had to leave my job for health reasons. After a period of getting my health stabilized, I had time to write, and I wrote a novel. This novel won a major competition and was published by a major Big Five publisher. It got tons of great reviews and won some national honors. I was happy with my editor and publicist and loved my book cover.

My publishers were happy with the sales—for a first book. It didn’t put me in line for the New York Times bestseller list any time in the near future. And my publishers even wanted more books, but they didn’t want to pay much in the way of an advance for them. The whole industry had gone this way of drastically smaller advances, it seemed. I began to fret about sales, following the BookScan numbers and Amazon rankings all the time. Even as everything in my dream came true, I became depressed and stressed about my sales and my future. 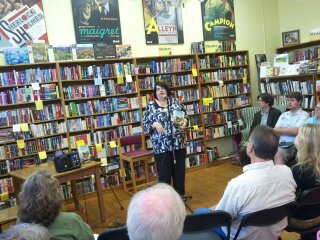 A good friend, a literary fiction writer who runs a prestigious MFA program, came to town on book tour, and my husband and I took him to dinner. As usual, we spent the night talking writing and the state of publishing. This is what writers tend to do, I’m afraid. He asked me about my book, and I told him about the Barnes & Noble Pick of the Month and the national book club selection and the reviews. But, I added, not wanting him to think I was bragging or that I was more successful than I was, it wasn’t translating into real money. My friend looked at me and gently said, “Linda, what you’ve got is what every MFA student in America wants—and most of the faculty, too.”

And he was right, of course. I had been phenomenally lucky. Instead of celebrating and enjoying all that wonderful good fortune, a dream come true, I had allowed myself to fall into the trap of moving the finish line until it was once more out of reach. I wasted all the goodness of a large part of that year with such silliness.

So I determined to do no more of that. I decided to change my attitude. I’m living the dream I always wanted—my books in stores with great reviews, up for awards, and other great bonuses, including enthusiastic, loyal readers and opportunities to read and speak at national venues. I decided I no longer cared what the BookScan numbers were. After researching it, I found that the BookScan numbers are not much of an accurate picture of how your sales are doing anymore. I decided to enjoy the fact that I was living my dream come true and that I wasn't going to immediately move the goalposts further down the field. 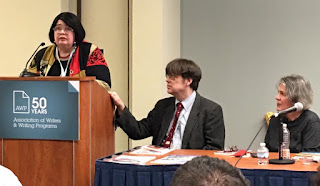 I’ve since decided that my focus in my professional life needs to be on writing the books I want read, the highest-quality books I can create, and on doing all I can to see that they connect with readers. The rest is out of my control, so I can’t waste my energy worrying about it. I’m just going to be happy living the dream.

Linda Rodriguez's Plotting the Character-Driven Novel, based on her popular workshop, and The World Is One Place: Native American Poets Visit the Middle East, an anthology she co-edited, are her newest books. Dark Sister: Poems will be published in May, 2018. Every Family Doubt, her fourth mystery novel featuring Cherokee campus police chief, Skeet Bannion, will appear in August, 2018, and Revising the Character-Driven Novel will be published in November, 2018. Her three earlier Skeet novels—Every Hidden Fear, Every Broken Trust, and Every Last Secret—and her books of poetry—Skin Hunger and Heart's Migration—have received critical recognition and awards, such as St. Martin's Press/Malice Domestic Best First Novel, International Latino Book Award, Latina Book Club Best Book of 2014, Midwest Voices & Visions, Elvira Cordero Cisneros Award, Thorpe Menn Award, and Ragdale and Macondo fellowships. Her short story, “The Good Neighbor,” published in the anthology, Kansas City Noir, has been optioned for film.