I watched It’s a Wonderful Life when NBC broadcast it earlier this year. Letting myself get caught up in George Bailey’s story and Clarence Oddbody’s struggle to get his wings, I began to think about how some of our most memorable holiday stories involve a supernatural or paranormal element. Consider Charles Dickens’ A Christmas Carol. Where would Scrooge have been without those ghosts? Even Miracle on 34th Street showcases Santa’s, or Kris Kringle’s, magical capabilities.

What is it about Christmas that brings makes us ponder the world beyond that we do not know and only through religious texts, unique circumstances, and fiction catch a glimpse? Does this preoccupation stem from the fact that during this cold time of year, memories of the past draw close? Or, does the nativity story give us the courage to ponder how humans may connect with God, angels, and dearly departed who may be looking out for us?

In all three of the Christmas stories I mentioned, the supernatural or paranormal creatures have the power to show humans what they may have been unable to see. For George, how the world might have been if he weren’t born. For Scrooge, how his actions had and could influence others. And, for Susie and her mother, how believing, even if you’re not certain, can help you lead a happier, more fulfilled life.

Often, when writers think about creating paranormal creatures, we consider allowing them to swoop in and rescue humans, like super heroes. But, in these Christmas stories, that doesn’t occur. A reader might wonder why Clarence doesn’t ask Gabriel if he can tell George that Mr. Potter has the missing money. In 1986, Saturday Night Live featured a sketch introduced by William Shatner, who said the lost ending for It’s a Wonderful Life had been discovered. Phil Hartman, playing Uncle Billy, remembers where he left the $8,000 and learns from Clarence at the bank that Potter made a deposit in that amount. George (Dana Carvey) and the crowd gathered at his house become an angry mob, hunting down Potter (Jon Lovitz) and beating him to a pulp. It’s just wasn’t the same as Clarence taking his lead from George’s suggestion and by example showing him no man who has friends can be a failure.

I decided to do some background research on the story, “The Greatest Gift” by Phillip Van Doren Stern, that became the basis for It’s a Wonderful Life. According to Wikipedia, Stern was an editor and author of books about the Civil War that have been described as authoritative and respected by scholars. In 1938, he woke from a dream that inspired his 4,000 word short story, which he completed in 1943. When he could not find a publisher, he sent it around in 200 Christmas cards. Eventually, it was published and came to the attention of RKO Pictures, which optioned it due to Cary Grant’s interest in playing George Bailey. Later, Frank Capra acquired the rights and the role went to James Stewart. I found a copy of “The Greatest Gift” available through Amazon. One of the reviewers pointed out that the names of the characters in that story weren’t the same as those “in the original” movie. I guess writers whose work has been adapted for the screen have been facing that criticism a long time. 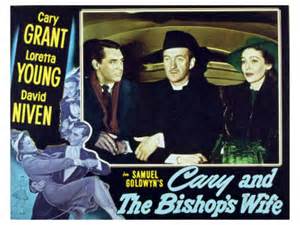 Speaking of Cary Grant, he later played, not the struggling human, but the divine intervenor in The Bishop’s Wife (a role reprised by Denzel Washington in The Preacher’s Wife). In that story, Grant’s angel, named Dudley, created more havoc for the humans, but in the end, found he had to allow them to make their own decisions, even though he had fallen in love with Julia (Loretta Young), the Bishop’s (David Niven) wife.

So, in remembering these holiday stories with paranormal elements and considering how they were constructed and created, what have I learned as a writer? Here are my thoughts:

(2) A ghost, an angel, or even Santa can never “fix’ a human’s problem, only help the human find his or her way.

(3) Even if a lesson is hard learned, humans are invariably better off by allowing some of the mystical qualities of the season to transform them.

Here’s wishing each of you a wonderful holiday and a new year of happy writing!
Posted by Paula Gail Benson at 12:00 AM