Now that December has arrived, the holiday season has truly begun. And I love every bit of it, even when nighttime comes early. After all, this means that now the festive lights are visible as early as six in the evening. 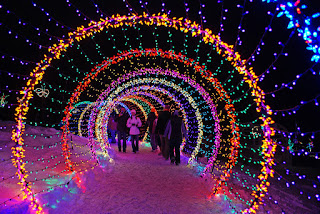 But it’s odd. Tis the season to be jolly, and yet I am still spending my time figuring out how to kill off characters who reside within my work in progress.
Mystery writers are a strange breed. This fact I discovered in the process of becoming one. Last fall I got on an elevator at a mystery fan conference and announced to another participant that my roomie and I “kill people for a living.” Then I guffawed. I thought everyone in the elevator was attending our crime writers’ convention and would understand, but I was wrong. Some were not. One woman fled from the elevator as soon as its doors opened. I must have scared her silly. (Really, it’s amazing what we crime writers talk about--how to kill people and let our criminals almost get away with murder—almost, but not quite.)
Another thing I learned while transforming myself from a public relations professional into a mystery author was that I needed to smooth out my habits. Previously my work methods featured intense bursts of creativity and fascination with large, innovative projects, followed by fallow periods when I regrouped. That style was exciting. Maintenance projects bored me. I was a hare, not a tortoise.

While I realized I might be able to produce one book in a frenzy of late nights, caffeinated days, and ignored loved ones, that was no way to build a sustainable career, writing book after book. So, I plotted my new path.

As I moved along toward the publication of my debut novel Desolation Row in 2013, I developed new patterns that enabled the publication in July 2015 of Rainy Day Women, the second in the Austin Starr Mystery series. Remember the old axiom “slow and steady wins the race?” Those became my new watchwords.And I am so glad I changed. It means that this month I can revel in the joy of the holiday season, making time for parties and gift wrapping and egg nog drinking and the like.
I admit that the old myth of the author writing a book in a white-hot fit of inspiration still appeals to me, but I’ve trained myself to see that sanity and calmness and balance have their rewards too. So, like we used to say back in the day, here’s my new motto -- just keep on truckin’.
~~~~~~~

Kay Kendall’s historical mysteries capture the spirit and turbulence of the 1960s. Kay’s degrees in Russian history and language help ground her tales in the Cold War, and her titles show she's a Bob Dylan buff too. DESOLATION ROW (2013) and RAINY DAY WOMEN (2015) are in her Austin Starr Mystery series. Austin is a 22-year-old Texas bride who ends up on the frontlines of societal change, learns to cope, and turns amateur sleuth. Kay lives in Texas with her Canadian husband, three house rabbits, and spaniel Wills. In her former life as a PR executive, Kay’s projects won international awards.
Posted by kk at 3:30 AM