The Oldest Web Mistress in Captivity!

Once upon a time—let’s say 1994—I directed public relations for a science institute that developed the second website in all of the great state of Texas. The scientist who designed this strange bird was proud, knowing it was The Future. However, try as he might, he could not get the other scientists to understand how important it was, this new wave of communication.

Finally, at long last, a second scientist got with the program and complained in a Faculty Meeting, august body that it was, how sad this institute’s website was, how deplorable, how it needed so much work to become great. Yada yada yada. Ego being what it is, scientist #1 got furious, said, “Fine Then you run the danged thing. I quit.” And so he did.

Suddenly the scientists realized their website was indeed a precious commodity and needed tending…but who was to do it? Certainly they could not do the work. They were far too important for such a mundane chore. So the scientists looked around and found, lo and behold, the PR lady, beavering away in her office. She only wrote news releases and newsletters, such silly little things. Surely SHE had time to do a website, even though SHE was not at all technically inclined. (Yes, of course there was an IT department, but those folks also were far too busy and important to manage a website.)

And that is the tale of how I—a liberal arts person to the core with nary a technical bone in my body--got dragged kicking and screaming into the digital world. The journey was arduous and the climb to competence was steep, but eventually I learned to develop and maintain this website. I confess I knew all along in my non-technically-inclined bones that this endeavor would be good for me. What I never suspected, however, was that it would turn out to guarantee my job security.

Soon I began to joke about my web work. I called myself…The Oldest Web Mistress in Captivity. I often wondered how many other aging baby boomers were handling institutional websites circa 1995. Not many back in the day, I bet. 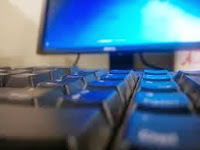 Recently I got to musing about my dalliance with all things digital as I fiddled with my author homepage, placed ads for my mystery DESOLATION ROW on my Facebook page, and Tweeted about an online interview I’d done. If I had not been forced into the digital world almost twenty years ago, how would I be doing today? Would I be like so many of my friends and age-mates, scared of All These New Things?

I am reminded of my mother and how she never learned how to operate the new hi-fi that my father brought home as a surprise for her one day in the 1950s. If she wanted to listen to a 33-rpm LP, then she had to ask him or me to do it for her. Now, she was not a stupid woman, far from it. Yet she would just throw up her hands, say “I can’t do things like that” and add “Please do it for me.” I believe some of that wariness towards all things technical rubbed off on me, made me scared. Alas, I’m sure I lost many decades of growing competence that way.

Now of course I thank my former scientific colleagues who insisted I do the institute’s web work. And thank heavens I’m comfortable in this digital new world order.

And my mother? Shortly before her death at age 91, she confided to me that it had all been an act, pretending not to understand how to use various machines. Grinning, she told me, “That way, I could always get someone to do it for me.” But, as for me...well, I’d rather do it myself!

Kay Kendall is the author of Desolation Row--An Austin Starr Mystery. You can view the book's trailer on YouTube or catch up with her on Twitter, Facebook,and Goodreads. Kay blogs here with the Stiletto Gang every first and third Wednesdays of each month.
Posted by The Stiletto Gang at 3:00 AM