Not a Good Start

Though Thanksgiving itself was wonderful, delicious food, lots of family members, that evening I came down with what turned out to be the flu. (And yes, I did have a flu shot.) I truly hoped I'd be well by today as I had a procedure scheduled--but though better, I'm too sick to have what was planned.

In the meanwhile, I got the contract and the first copy of the galley proof of my next Rocky Bluff P.D. novel. I was in no shape to even look at it. I've got it printed out now, and hopefully will feel like checking it soon.

So, until such time as I feel much better, I am going to tell you about the first novel I ever had published. And the reason I'm tell you is because it is now available with a new title--Indian Paintbrush--and only on Kindle. 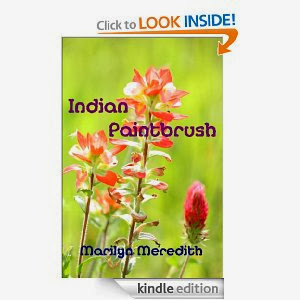 When it was first published back in 1982 it was called Trail to Glory which had little to do with the actual story. Based on my mother's genealogy which my sister did, there were lot of questions to be answered. I did research to figure out why people did what they did, and what I discovered is that the women in the family often were left to make their own way during difficult times and situations.
I've always called it an historical family saga based on the lives of real people. It's a much longer book than I usually write, but I had a great time writing and rewriting it, learning much about my family along the way.
And what I learned included a big family secret--one that was kept until my sister dug into the family genealogy.
http://www.amazon.com/Indian-Paintbrush-Marilyn-Meredith-ebook/dp/B00FWAM76I/ref=sr_1_1?s=digital-text&ie=UTF8&qid=1386004386&sr=1-1&keywords=indian+paintbrush+by+marilyn+Meredith
or
http://tinyurl.com/l66ue7w
I've learned a lot about writing since I wrote this book, but I still think it's a good story filled with romance.
Marilyn
﻿
Posted by The Stiletto Gang at 1:30 AM