Some Thoughts on Setting

Whenever I go anywhere I always pay attention to everything that's around. Who knows, someday I might write about a place like that.

My Rocky Bluff P.D. crime novels are set in a fictional small beach town between Santa Barbara and Ventura. There is such a place and it's called Carpenteria. It is too large for the community I write about and I prefer not to use a real place so I don't use a business that goes belly-up or have a problem with new city ordinances or changes in streets. 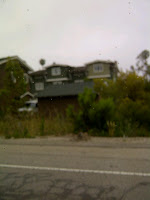 However, Rocky Bluff has similarities to Carpenteria when it comes to weather and what it's like to live near the beach in that part of Southern California. Whenever I spend time in the area I like to soak up the flavor and spend time seeing what people are doing, what the houses look like, what kind of plants thrive. Recently when I attended a wedding in my grandson's uncle's huge and elegant backyard, which I soon learned I should have called it a private estate in Santa Barbara, I  realized that one day I could have my characters do something in a "private estate" which would give me a while new setting. It's a whole new lifestyle than what I'm used to and been writing about though I've known the uncle since he was barely out of high school, and he graduated with my middle daughter.

But, I digress. The whole point is that though I'm writing about a fictional town I want it to seem real and represent the area that I am writing about.

My Deputy Tempe Crabtree mysteries are set in a place much like where I live except that I moved it up in the mountains another 1000 feet. The other wedding I went to was at a hidden away resort with a gorgeous lodge and many cabins tucked away among the pines, cedars and Sequoias along with with waterfalls and ponds. It occurred to me that it was much like my imaginary Bear Creek. So again, I took in all the smells, the beauty of the place.


My made-up town of Bear Creek has a strong resemblance to Springville where I live. I chose not to call it by it's real name, not just because I moved it, but because the businesses don't last long and then new ones come in. I wanted a more permanent look to my main street. We are very near an Indian reservation so I also have one in some of my mysteries. In fact, Deputy Crabtree herself was inspired by a young Native woman I met quite a few years ago. We chatted and she told me a bit about growing up on the reservation. Tempe looks like this woman. I saw her once again when she had art on display at the Springville Inn (yes, it plays a prominent role in many books) and my first Deputy Tempe Crabtree mystery had just been published and I gave her a copy.

Many of that series have been published since then. Recently, I had the opportunity to spend some time with my model for Tempe again--like Tempe she has aged a bit, but still looks like who I see in my mind's eye as I'm writing. She doesn't live on the reservation anymore, but close by and has been lately engaged in decorating the school bus stops with native designs--she draws them and supervises children and adults in filling in the colors. H'mmm, maybe I can write something about that in one of my mysteries. 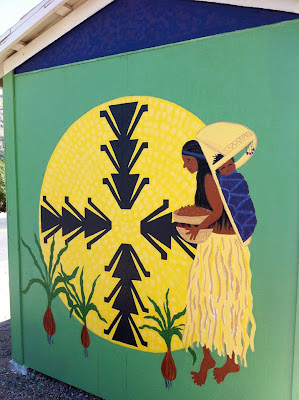 With either series, fictional or not, I want the settings to see real when someone is reading one of the books.