Three Highlights of the 2012, Two New Babies and a New E-Book


We were delighted to welcome two new great-grandbabies into our family. Brings the count to 13.

And near the end of the year I tried my hand at e-publishing one of my books. I was a dismal failure all the way around. First, I couldn't understand the directions that so many people find so simple. I wrote a desperate email to a friend who was doing great with her self-published book on Kindle. She confessed she wasn't the one who had formatted her book for Kindle, it was her husband. He took pity on me and formatted the book. My friend went through it and found some errors which I corrected. And of course I needed a cover--someone was recommended to me and I hired her.

Then despite great directions I couldn't figure out how to put the whole thing up. (Are you beginning to get the idea that I might have a learning disorder?) What I have found is that the older I get the longer it takes me to get the hang of something new. Friend's husband put the book up for sale.

Of course I promoted like crazy. Sales were just okay, nothing like people have been reporting all over the place. So, I decided to try the free route for two days only. Another thing to figure out. A good friend sent me explicit email directions and I managed to to do it.  Again, lots of promotion. The download numbers were okay, but nothing like others reported. And, I still had no reviews.

Several of my author friends said they downloaded it and I begged for reviews. Finally one appeared. Will all this result in sales like is supposed to happen according to all the successful souls doing this? Haven't checked lately, but when I did, I had one.

This isn't the kind of book most of the people who frequent this blog read, it's what I call a supernatural mystery. It borders on horror and has strong Christian elements.  Here's the first review:


5.0 out of 5 stars Supernatural fiction with a Christian twist
By Pat Browning
I sat up all night reading THE DEVIL'S FOOTHOLD. That always happens when I take a "quick peek" at the opening chapter of a fascinating new book. In a departure from her popular Tempe Crabtree series, Marilyn Meredith's new book tackles devil worship in a small town in the Northern California foothills. The cult has pulled in members of the town elite, motivated by lust for power, and a few teenagers who just want a little excitement.

The book has some gruesome aspects and a distinctly religious tone. However, Meredith is a thoughtful writer with enough experience to make it easy to read. Fans of the Tempe Crabtree series will appreciate familiar characters -- a female deputy, a romantic pastor, and a lazy sheriff who looks down his nose at the female deputy. The ending is a humdinger. 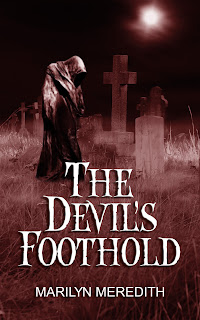 And one more tidbit about this book. This began as the first book in the Deputy Tempe Crabtree series. When I wrote the second one, I realized the tone of the book was much different and decided to change this one with a new setting and new characters. I missed one of the names--which Pat pointed out to me. Hopefully, I'll have that fixed soon--if I can figure out how to do it.

Next up for me will be a new Rocky Bluff P.D. mystery called Dangerous Impulses. This series has been called a cozy police procedural which I write under the name F. M. Meredith.