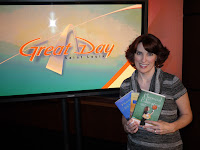 I had the pleasure of appearing on "Great Day St. Louis" again yesterday, something I've been doing about every other month or so for a few years now.  Watching myself on TV today compared to when I was first published in 1999 is a hoot.  Back then, when I was nervous, I tended to do bug eyes (aka "deer in headlights").  The longer I spoke, the bigger my eyes got.  Although, come to think of it, I did that when speaking in person to others, too.  I remember one conversation with Charlaine Harris eons back when she finally shouted at me, "Blink, dammit!"  Thank goodness, I got over that.

Back to "Great Day" and the Great Reads segment from yesterday.  I always look forward to going downtown to the KMOV Channel 4 studios.  It means getting to play hooky from my current work-in-progress (and those pesky looming deadlines), so I jump at the chance!  Ed loves going with me, so he usually takes the morning off.  I never protest, as I don't mind a bit having a "driver" drop me off in front of the building while he goes to park the car in the appointed lot a few blocks up (it's especially handy-dandy when the weather is ugly).

I even have fun pushing through the revolving doors to get into the KMOV lobby, where I sign in at the reception desk and then wait for Sammi, an assistant producer, to come get me (and any other guests hanging around).  We enter the newsroom where various reporters, meteorologists, and even anchor-people are working on stories in their cubbies. Then it's back through a hallway and into the studio, approaching from behind a wall and emerging right beside the Weather Center (Ed loves the Weather Center most of all). 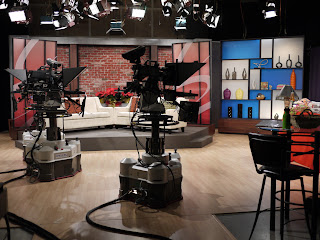 Since it's the holiday season, the anchor desk has lots of poinsettias around it, which looks so pretty.  The chairs for guests of "Great Day" are right beside it.  Ed and I always like to poke around, take pictures, talk to Jenn and Brooke, the producers (who are adorable!), or Matt Chambers (one of the "Great Day" co-hosts and one of the station's most beloved weather dudes!), and also with other guests (that's how I met Lisa Bertrand, Wade Rouse, and a whole bunch of other cool people that I like to keep in touch with, or at least keep tabs on!).

Yesterday, the owner of a gold, silver, and coin shop was on-set for a segment, and I got his card (I really want to sell my old jewelry from high school that I will never wear again or pass down to anyone!).  He gave us newly-minted quarters and a newly-minted dollar.  So cool!  You never know what's going to happen on "Great Day"--I once got a fabulous cookbook from a visiting chef!  But I digress!

Once Sammi gets me settled inside, she hands me a script.  I find out which co-host will do the segment with me (yesterday, it was Matt) and what Matt will see running across the teleprompter.  That way, I have a good idea of what to expect when I sit down with him on the set, the camera rolls (and my mike goes live), and we start talking about books. The script also notes the approximate time I'll be on-air, so I know if I'm early in the show or later.  For Thursday, I was on at 10:34, so Ed and I got to sit and watch the cooking segment (turkey pot pie!), an interior designer discussing her family's "Christmas auction" (which they do in lieu of buying lots of gifts), and a therapist explaining seasonal mood changes (my mood only gets better the colder and snowier it gets!). 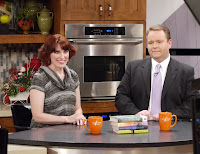 And then it was my turn!  Sammi had me miked up the back of my sweater, and I followed her over the camera cables to the kitchen area, where I sat on a stool behind the counter with Matt.  I'm usually on the other side of the set behind a glass-topped table (or, occasionally, on the sofa).  So this was something new!

Once the previous segment finished (we got to watch it as it aired), Matt introduced me and the Great Reads segment...and off we went!  Here's the bit so you can see it for yourself (I gush about three recent books I loved, including our very own Maggie Barbieri's PHYSICAL EDUCATION and recent Stiletto guest blogger Marilyn Brant's A SUMMER IN EUROPE).  It only takes about five minutes, and then I'm done!  As always whenever I leave the "Great Day" set, I can't wait to go back again!  ;-)
Posted by The Stiletto Gang at 3:01 AM