When Can I Raid My Character's Closet? 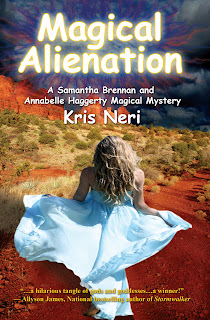 Do you ever long to raid your characters’ closets? I do, though only when that character is Samantha Brennan the fake psychic featured in my Magical Mystery series HIGH CRIMES ON THE MAGICAL PLANE and the newly-released, MAGICAL ALIENATION.

I don’t long to borrow any duds from her co-protagonist, Annabelle Haggerty because, although Annabelle a genuine Celtic goddess, descended from the gods that fill the mythology books, she’s also an FBI agent. She dresses not the way female FBI agents are often depicted on TV, with their tight blouses and bare midriffs, but as I imagine they dress in real life, in stodgy professional suits with sensible heels.

Samantha, on the other hand, is anything but sensible. Here’s how she presented herself to me when she first introduced herself to me early in the planning stage of the first book of the series, HIGH CRIMES ON THE MAGICAL PLANE, a Lefty Award nominee for Best Humorous Mystery:

"Man, what a sight I was! Long blonde hair curling wildly in every direction, crowned with a wreath of battered silk flowers held together with Christmas tree garland. Makeup by Crayola. And that dress I wore—half Renaissance ball gown in bright blue satin and lace, half soothsayer garb with its filmy organdy layers, half jester suit. Too many halves, I know, but it was quite a dress.”

That was exactly how I heard it in my head, and that’s also exactly how it appeared in the book. How could I, a mere writer, hope to top the appearance of such a determined fake psychic?

HIGH CRIMES ON THE MAGICAL PLANE was so much fun to write, not just because of Samantha’s eccentric wardrobe, but because of the wild paranormal adventures it contains. And the latest in the series, MAGICAL ALIENATION, was even more fun.

Here’s a little tease of the story to tell you what it’s about:

“A spaceship crash in Roswell…a rumored alien…the mysterious Area 51…a harmonic convergence in Sedona. No connection, right? With its rock stars and shape shifters, gods and haunting militia leaders — MAGICAL ALIENATION will turn what you think you know upside down.

Fake psychic Samantha Brennan and Celtic goddess/FBI agent Annabelle Haggerty team up again. While the rock people twist the surface of the earth and Sedona heads into the darkest night the planet has ever seen, Samantha wonders which, if any of them, will survive it. But when Celtic gods are involved, nothing is ever as it appears.”

The dress I wore today was a medieval gown I’d bought from some touring attraction that had shut down. The floor-length gray silk dress had looked too simple for me, so I covered it with red and black graffiti; snotty jibes written in Middle English. I’d also placed my wimple properly on my head, but my long, curly blonde hair was so wild, it kept knocking that pointy hat askew. Now I probably looked more like some crazed lunatic who’d been mugged by the Middle Ages.”

And then there was this outfit:

I wore a court jester suit today, with puffy jacket sleeves and short pants in magenta and gold. Under the pants I wore bright purple tights. A bell dangled from the jester hat perched at a rakish angle on my curly blonde hair. I’d chosen high-heeled gold lamé pumps in lieu of jester shoes. Normally, I preferred dresses, but since I was visiting a politician, I thought the occasion called for some whimsy.”

Samantha insists she dresses as she does so potential clients will take her seriously as a celebrity psychic, and yet she’s continually shocked when people regard her as a flake. I personally believe her taste in clothes simply reflects the inner girl, who’s definitely marching to the beat of a tone-deaf drummer.

And here’s another little secret: While I doubt I’d have the guts to dress as Samantha does, a tiny part of me probably wishes I could. If her wardrobe expresses her true spirit, it expresses my buried-too-deep-to find-it spirit, which I’m only able to access through her. 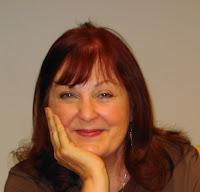 The real reason why I have such fun clothing Samantha? She’s dressing for me, too. With a pronounced taste for the offbeat, Kris Neri writes the Samantha Brennan and Annabelle Haggerty Magical Mystery series, HIGH CRIMES ON THE MAGICAL PLANE, a Lefty Award nominee for Best Humorous Mystery, and MAGICAL ALIENATION. She also write the hilarious Tracy Eaton Mysteries, featuring the daughter of eccentric Hollywood stars, the latest of which was REVENGE FOR OLD TIMES’ SAKE, also a Lefty Award nominee.

website:  http://www.krisneri.com
buy Magical Alienation at Well Red Coyote
Posted by The Stiletto Gang at 5:00 AM