Taking A Chapter from Lottawatah Twister 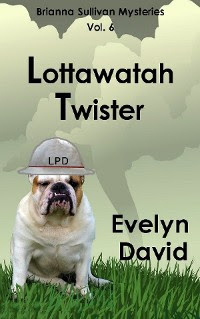 Sassy Jackson said all the right things but she and I both knew the truth. She'd rather have her teeth pulled and run naked through the ladies auxiliary meeting at the First Baptist Church than have me hiding out at her house.

Sassy's real name was Sylvia but no one called her that. Having accidentally poisoned her with shellfish at an earlier social event, I'd finally gotten to know both her and her husband, Wayne, over Thanksgiving. In fact I'd met Cooper's entire extended family, including a few dead ones, that holiday. Sassy wasn't one for believing in ghosts. God, Satan, and perhaps angels were as far as her concept of reality would stretch. You can see why she'd have problems with a "so-called" psychic dating her favorite and only son. I think she'd been hoping that Cooper would lose interest and she could write me off as a bad memory.

After a hot shower and a set of clean clothes, jeans and a t-shirt that probably belonged to Katie, Cooper's younger sister, I felt almost human again. Katie didn't live with Sassy and Wayne but she spent a lot of time at the family farm. I was under orders to hide in the attic if she showed up. I got along with Katie okay, but she couldn't keep a secret. And my being alive was supposed to stay a secret for as long as possible or under Cooper figured out who was trying to kill me.

Over a bowl of stew and several pieces of the best cornbread I'd ever eaten, I tried to make conversation with Sassy.

"Is Aunt Ida here?" Ida was actually Cooper's great-aunt. She lived at the farm but I hadn't seen her since Cooper dropped me off looking liked a drowned rat. I'd bet money the house slippers I was wearing were hers. They were all I could tolerate on my blistered feet.

"No." Sassy started cleaning the stove and the pot she'd reheated my stew in. Guess I wasn't going to get seconds. I wrapped my arm around my half-finished bowl and grabbed another piece of cornbread before the plate holding the crusty stuff disappeared too.

"Visiting someone?" I really did need to know if the old lady was coming back soon. Cooper hadn't given me any instructions about his great-aunt but I needed to decide how much to tell her.

Sassy sniffed and glanced at the apple clock on the wall. "She's in San Antonio with her Red Hat group. They're supposed to be touring the Alamo and other historic sites. But from what she's said on the telephone, the group is spending a lot of time drinking margaritas on the River Walk and complaining about the pigeons. She won't be back until next week. Surely all this fuss will long be over with by then."

What she meant was that I'd be home or dead by then. "Thanks for your hospitality. I'll try not to get in your way while I'm here."

Sassy gave me another look and I pushed my empty bowl towards her. It went into the dishwater and was cleaned and drying in the wire drainer in seconds. "I need to get supper started. Wayne will be coming home soon. We eat dinner at 6 pm every night."

I took a look at the wall clock. It was almost 5. Perhaps I shouldn't have filled up on cornbread, but having missed lunch and after burning a zillion calories getting out of the well, I'd been starved. She'd taken pity on me and reheated some leftovers. One thing I had to give her, Sassy Jackson was an excellent cook.

"Would you like some help?" I was only asking to be polite. Sassy might put me to work on the cleanup crew, but she wasn't going to let me do any actual cooking.

She tried to smile but it ended up looking more like a grimace. "Why don't you rest awhile? Cooper said you'd had quite an ordeal." 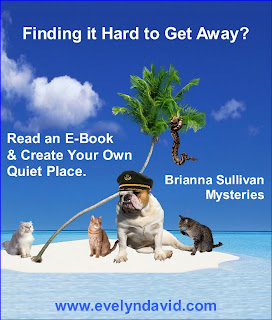 Romances
Love Lessons - Kindle - Nook - Smashwords
Posted by The Stiletto Gang at 5:00 AM