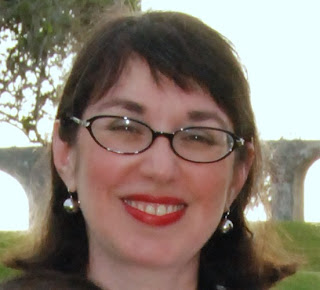 Georgia Davidis Malone lives happily in a Philadelphia suburb with her fantastic husband and wonderful (most of the time) children. While having practiced as a civil litigator, Georgia now works as a chauffeur, housekeeper, laundry service and cook (a/k/a stay-at-home mom). The chauffeur part of the job enables her to indulge in her second love (after family), reading mystery novels. Thanks to her family for understanding that, sometimes, dinner is takeout because Georgia became so engrossed in a book (just reading it, not even writing it) that she lost track of time.

Donna Parker. Nancy Drew. Trixie Belden. These were the first mysteries I remember reading, teenage sleuths who lived lives filled with adventure and danger. These three sleuths provided a respite during the teenage angst years. It was to mystery that I escaped and mystery which still provides my solace. Whether legal, historical, English country house or humorous, police procedurals, female detectives, and romantic suspense, to name a few categories, mysteries are my “drug” of choice.

Mysteries assist in learning about life. Dame Agatha Christie’s Miss Marple lived in a small English village for all her “life” and yet she understood people better than many others who had traveled the world. According to Miss Marple (and I’m majorly paraphrasing here), one could see all manner of human behavior in a small village, which psychology could then be transferred to the world at large.

Mysteries provide resolution. In a mystery, particularly a “cozy” (my favorite type), the problems presented in life can be solved. At the end of a few hundred pages, all the loose ends are tied up and answers to all questions provided. If only all the problems of life could be so easily answered.

The books, especially those written during the Golden Age of mysteries (mostly the 1920s, ‘30’s and ‘40’s), provide puzzles that can be solved by the reader. In the mysteries I love, whether in a country mansion or an academic community, there is a finite list of suspects for whatever the crime happens to be. Like Sudoku and crossword puzzles, the mysteries exercise one’s mind but there is always an answer provided at the end (not necessarily found in real life, though).

Mysteries are a great place to escape, whether to revisit a place I’ve already been or to discover somewhere I’ve never visited. I’ve traveled the world through mysteries, to places I’ll probably never see (whether the Botswana of Alexander McCall Smith, the Africa of Suzanne Arruda or the Australia of Kerry Greenwood) and to places I’ve seen and love to visit time and time again (the England of Agatha Christie, Ngaio Marsh, Anne Perry, G.M. Malliet or the Greece of Mary Stewart).

There are so many writers whom I adore reading, including the writers of the Stiletto Gang (two [Maggie Barbieri and the northern half of Evelyn David] of whom I was privileged to meet, at the 2009 Malice Domestic, and who are really fantastic people and authors). Some of my other favorites include the writers I’ve already mentioned, as well as other writers whom I met at Malice Domestic: Louise Penny (who is also a wonderful person and fantastic writer), Ann Parker (who is especially nice and very modest), Cathy Pickens (whom I saw on a panel and who had me and my sister in stitches for the entire time), Elaine Viets, Rhys Bowen, JoAnna Carl, Krista Davis, Dana Cameron, Mary Jane Maffini.

(And now a plug for Malice Domestic, which was an awesome experience. As I tell people, it was like the Hollywood of the mystery world -- at least for me -- and I was thrilled and agape the entire time at the lineup of authors who attended!)

There are then writers whom I wish I could have met but who were before my time: Georgette Heyer, Margery Allingham, Josephine Tey, Sir Arthur Conan Doyle, Erle Stanley Gardner, John Mortimer, and Rex Stout. Finally, there are those writers whom I still may have the chance to meet and, in the meantime, heartily enjoy and anticipate their books: M.C. Beaton, Elizabeth Peters, Jacqueline Winspear, Margit Liesche, and the list goes on and on.

In an age where the greatest mysteries, both big and small (whether Osama bin Laden will ever be caught, whether my house will ever approach the cleanliness of my mother’s) remain unsolved, it’s nice to be able to escape to a different life, but with a story that will always provide answers. Mysteries fill the bill perfectly.

Georgia Davidis Malone
Posted by Dea, Kia, Jake at 5:00 AM