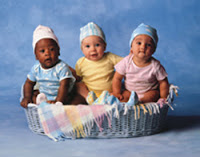 I guess Mazel Tovs are in order. Nicole Richie announced on The Letterman Show that after two kids together, she and Joel Madden have decided to tie the knot.

Marriage-phobia to me is weird. You get married, and if you don’t like it, you get divorced. I’d like for folks to take it a little more seriously than Brittany Spears first Vegas 25-hour nuptials, but assuming no children are involved, it’s paperwork.

I can even understand those couples who take a principled, anti Prop-8 stand and declare “we’re not getting married until all couples have that choice.”

Where I get confused are those men and women who feel like the commitment to each other is harder than a commitment to a kid(s). Frankly, without children, you never have to see each other again. Once you have a baby, if you intend to be an involved parent, you’re going to be seeing a lot of that other person for the rest of your life. And if you really are committed to being a good parent, that means not bad-mouthing your ex- no matter what a jerk he/she may be. Are you listening Kim Basinger and Alec Baldwin? How about you Sherri Shepherd? Putting kids in the middle is always, always wrong – period.

Sean Combs, of Puff Daddy/P Diddy/Diddy fame, delayed marriage until “the time is right.” He made that declaration while his long-time girlfriend, Kim Porter, was pregnant with twins. As he carefully explained, “I have to be ready to get married.” So, in the end, Kim and he split, and he’s the father to five kids by three different women – but doesn’t have a divorce paper in his safety deposit box. Now maybe he’ll get the Father of the Year award, but I have to wonder about anyone who gives his sixteen year old son a $360,000 car as a birthday gift. Actually, I’ve got questions for anyone who gives a car of any vintage or price to a 16-year-old. Maybe he didn’t want the kid to practice on his Rolls?

But the point is, parenting is more than money – although obviously, I expect all parents to financially support their minor children. I’m not even going to say Bravo, Sean, for working out child support arrangements with all the mothers. He’s supposed to do that.

Nor am I suggesting that having kids precludes divorce if the marriage is unworkable or unfixable. (I understand that for gay couples, marriage, and therefore divorce, is not yet an option is most states). But a clear, strong commitment between parents pre-kids would certainly be on my list of prerequisites prior to deciding to have kids. If nothing else, it tells your children that commitment to another person is not only possible, but wonderful.

But in the meantime, is Nicole registered at Bed, Bath, and Beyond?