Mysteries and the Return to Adolesence 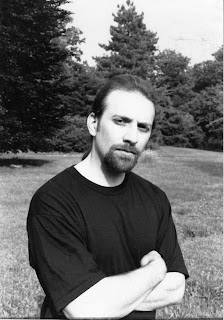 Steven Rigolosi is the author of the Tales from the Back Page series of mystery and suspense novels. Each book takes an ad on the back page of a New York City newspaper as its starting point. Who Gets the Apartment? won the David (awarded by the Deadly Ink convention) for best mystery of 2006. Circle of Assassins followed in 2007. His latest, Androgynous Murder House Party, just came out in June. He can be reached at srigolosi@yahoo.com, or followed on twitter at twitter.com/srigolosi. He lives in Northern New Jersey. He does not wear stilettos, but Robin Anders (the hero/heroine of Androgynous Murder House Party, might.

Like Maggie Barbieri, I used to be an editor of college English textbooks. For those of you who haven’t seen an English textbook lately, I can tell you that a lot of them go on at length about the process of writing and the writer’s mindset. I used to think, “Geez, everyone should stop talking and thinking about writing, and just do it.” Part of my thinking (back in the day) had been that every individual writer follows a very different process, so attempting to force one particular method down someone’s throat seemed unwise and destined for failure. 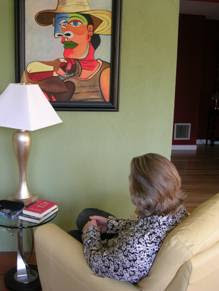 I used to wonder, too, whether writers really think about themselves as writers all that much, or whether they are more focused on the work they are writing. I used to think of myself as a product-oriented person, not one who thinks much about himself as a Writer. But I think that may be a self-deception, because each of my books (I’ve written three so far) has gone through progressively more drafts, which means that I am secretly a process-oriented person too. For example, with my third and most recent, Androgynous Murder House Party, I slogged through five drafts. (Editor’s only note on first draft: “Cut 100 pages.”) And now I’m afraid to start on the fourth because I know it’s going to take me six drafts and I’m feeling kind of tired.

I had another epiphany, too: Being published is like returning to the worst of your adolescence. By putting your work out there, you expose yourself to all kinds of scrutiny, and you start to have the same types of doubts that plagued you as a teenager. Here are the questions I find myself asking of no one in particular:

1. Will people think I’m nuts? As mystery writers, we spend a good deal of time plotting ways to kill people, creatively and with panache. We also need to create some pretty creepy characters to provide good motivation and propel the story along. So during my dark nights of the soul, I ask myself, “Will my family or colleagues think I am plotting to kill them? Will they think that my narrator is a thinly disguised version of myself?” Most likely nobody gives my mental stability a second thought, but surely some do. I mean, think about Stephen King. Haven’t we all wondered at some point if the man is as warped as the books?

2. Will people like my books? We get so invested in our books—we want people to love them and their characters. Certainly we want people to buy our books, so that our contracts can get renewed, but mostly we want people to read them and enjoy them. So I work myself up into a state, even as I turn in my final manuscript, that for whatever reason someone out there will not enjoy my book and that I will have wasted his or her time. And I know that has happened, and I wish I could apologize to the poor reader who would have been better off with Janet Evanovich, but all I can say is, “I did the best I could.”

3. Is this stupid? Many of us write to entertain our readers, to give them a pleasant sense of escape. To accomplish that, we have to turbo-charge reality, making our fictional worlds a lot more event-filled and interesting than our everyday lives. We have to push plots pretty far sometimes, which always makes me wonder, “Are people going to roll their eyes and think this is ridiculous?” It’s always a fear, but it’s something we have to do to move our work beyond the mundane and into the realm of entertainment. And it’s always amazing to see how that all-important suspension-of-disbelief-o-meter has literally millions of settings, one for each reader, with no two exactly alike. We want our readers to have a good time, but how do we do that without insulting their intelligence? Oh, I lose sleep over that one.

4. Hasn’t this all been done before, and better than I’m doing it? I’m so thrilled to be writing in a genre I love, but I find it intimidating as hell. I am most definitely subject to the anxiety of influence, wondering if I can ever do anything different, unique, better than the greats. How do I work within the formulas of the genre but give them a different spin so that readers have an engaging read—and so that my agent will continue to represent me and my publisher will continue to want to invest in my books? I get a little depressed when I read something really fabulous, new or old, because I wonder if I’ll ever have someone think so highly of my work. And yet that sort of insecurity spurs me forward, forcing me to think more carefully about the work, the words, and even the marketing.

So how does this all figure into Androgynous Murder House Party? In a nutshell, the book has two very different mysteries to solve. The first is of the traditional variety—a key figure in a circle of friends is murdered, and the person’s ex-lover decides to investigate. Nothing new there. The second is of a more mind-melting variety: The reader has to figure out the gender of each of the six main characters. The fact that they all have androgynous names like Robin, Lee, Chris, and Alex doesn’t provide readers with many clues, so they have to use context, conversation, and behavior to figure it all out.

And all the questions above apply. Will people think that Robin Anders, my narrator, is a veiled representation of myself? God, I hope not, since Robin is a pill-popping, pretentious snob. Will people like the book? The reviews have been good so far, with some raves, but also with a few people saying they found the book “too clever by half” and too “cutesy.” (That last adjective really threw me for a loop. “Nasty”--perhaps. But “cutesy?”) Is the book stupid—could any of it really happen in “real life”? Of course not, though interestingly I haven’t heard any criticism (yet) that it’s too over the top, though it clearly is. And of course Sarah Caudwell has done an androgynous narrator already, so what have I really contributed to the genre? I hope I’ve done a new and different take on the Caudwell scenario. Her cast is a loving if impatient group of friends, while mine is composed of a bunch of back-stabbing, greedy egotists. Someone recently described Androgynous Murder House Party as “an episode of Friends in which everyone decides they hate each other,” and I just loved that.

Of course, my last and final question is: Will the Stiletto Gang ever invite me back to do another guest blog, after I’ve gone over the maximum word count and exposed my twisted mind to the innocent and unsuspecting mystery-reading public?

Steven Rigolosi
Posted by The Stiletto Gang at 5:00 AM