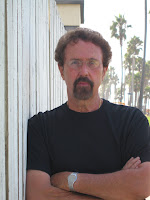 Timothy Hallinan has written ten published novels under his own name and several others under pseudonyms. BREATHING WATER, which will be released by William Morrow on August 18, is the third in his new series of Bangkok thrillers that feature an American "rough-travel" writer named Poke (short for Philip) Rafferty and the family he has assembled in Bangkok -- his wife, Rose a former bar girl in the notorious Patpong district, and their adopted daughter, Miaow, who was a street child until they took her in. In BREATHING WATER, she's ten going on 28. The series has received excellent reviews, including some of the elusive trade review "stars," and the first two books, A NAIL THROUGH THE HEART and THE FOURTH WATCHER, made Ten Best lists both here and abroad. Additionally, all three books have been singled out by the country's independent bookstores as either monthly picks or notables. Hallinan, who also wrote a six-book series Los Angeles PI series in the 1990s, has lived part of each year in Bangkok since 1981.


It wasn't until I came to Internet mystery discussion groups that I realized that a large percentage of readers want to read series in order. It had always been my assumption that one goal of writing a series should be to write individual volumes that can be picked up in any sequence. Book Number Three should be a terrific read even for someone who's never opened Books One and Two.

My first series of novels, featuring the uselessly overeducated LA private eye Simeon Grist, could be read frontward, backward, or sideways. A reader could have picked up Number Four without even knowing there was a Number One.

There are good reasons for series books to work as stand-alones. Let's say you're browsing and you pick up a book by a new author. You flip through it and think it might be worth a few hours. And then you realize that it's the fourth in a series, and you ask yourself, “Am I going to have to read three other books just to get to this one?” That's enough all by itself to stop some people, but suppose it's not suppose you look for the first three titles in the series and they're . . . not . . . there. Guess which book, out of the four you're toting, is going to wind up back on the shelf. (By the way, this is the main reason many booksellers don't like series.)

I'm hoping the information that follows will help some poor writer who is thinking about creating a series and would like the books in his or her series to be true stand-alones. A series that booksellers will love.

If so, here is one thing you do not, under any circumstances, want to do.

Do NOT include a child among your primary continuing characters.

When I decided to write a series of Bangkok thrillers about an expatriate American rough-travel writer named Poke Rafferty, I thought it would give him a deeper relationship with Thailand if he'd created a family there. I also thought that doing that would get me away from the lone-wolf private eye stereotype. Within about 30 seconds of making that decision, I realized that Poke came from a broken family, that he had been scarred by his father's abandonment, and that the family he has pulled together in Thailand is the most important thing in his life.

It's an unorthodox family, to be sure. His wife, Rose, is a former dancer in Bangkok's notorious Patpong red-light district. (Yes, “dancer” is a euphemism.) Their daughter, Miaow, was adopted off the Bangkok streets, where she'd been struggling for a living since she was three or four. She's eight or nine (no one knows for sure) in the first book, A Nail Through the Heart, and she's going on eleven in the third and newest one, Breathing Water.

And there's the problem. Those particular years would be a huge amount of time in any kid's life, but when she's gone from being a semi-literate street child to being a desperately wanna-be middle class kid in a school where everyone is fancier, richer, and more sophisticated than she is, it's a geological era. And because the family is at the heart of all the novels – I think of the thriller stories as rites of passage for the family – the installments in Miaow's development comprise a continuing story, and it can really only be read in one order.

In fact, Miaow's growth and development comprise the most important element in the family's life. In the first book, she's barely off the streets, still learning to read and trying to get used to living eight stories above the ground instead of in doorways and abandoned buildings. By the time of the current one, BREATHING WATER, she's at the top of her class in international school and vaguely ashamed of ever having lived on the street. In the one I'm writing now, THE ROCKS, she's playing Ariel in a school production of Shakespeare's “The Tempest.” And Rose and Poke, as her adoptive mother and father, are deeply involved in all of it.

If I'd realized then the impact Miaow would have on the series, I would have gone ahead and written her anyway, because she's more fun to write than anyone else in the books.

Tim Hallinan
Posted by The Stiletto Gang at 5:00 AM