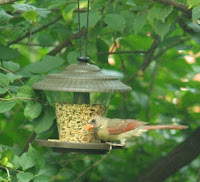 Today I'm filling in for the Northern half of Evelyn David, and it's my honor to do so. I decided to tell y'all the story of the cardinals who live in our yard, and I do mean the actual birds. If we had a pair of Cardinal ball players nesting in our pear tree, I have a feeling even animal-lover Tony LaRussa would not be too happy about it.

Let me start at the very beginning. When Ed and I bought our house three years ago, the yard had been neglected for quite awhile. The bad kind of honeysuckle had grown rampant in our backyard, and Ed practically had to go out wielding a machete to chop it back (and we still have more chopping to do--that stuff doesn't die easily, does it?). I unearthed lots of brick garden surrounds and added more so I could plant like a maniac. We cut back ivy from the patio and found the loveliest stone border. The side yard, which we labeled "The Wasteland," was regraded with help from a landscaping crew. A flagstone path was added with liriope on either side. Our rose bushes came back to life, and things started looking healthy and happy again.

The front yard was no better than the back. We hired Ray's Tree Service to tear out a HUGE forsythia bush that had morphed into a 6' x 6' blob. Half of it grew over the driveway, which made it hard for Ed to put his car in on that side until he'd hacked it back to the grass. We managed to trim down another forsythia, and we demolished weeds that had grown over the gas meter and a downspout. Six other overgrown shrubs sat in the second tier of a "garden" directly in front of the house. We pruned them as much as we could, but still the tallest stood about 8' or 9' and even the flatter bushes went half-way up the frames of our nearly floor-to-ceiling windows. We finally decided to have those torn out as well after finding damage to the wood window frames and realizing rain-water was leaking into the basement down that outside wall.

I'm glad I was home the day Ray's crew showed up to cut those suckers down. Just before they hauled the 8' or 9' shrub to their truck, I noticed a nest within and two baby birds practically falling out. I removed it, worried the babies were dead already beacuse they were SO tiny and pink. It was cold that day, sunny but with a blustery wind. I had no clue what to do with them. I stuck the nest in the only remaining bush nearby: the saved forysthia. Then I ran inside and called my mom.

Thank goodness, Mom remembered there was the Wild Bird Sanctuary in Overland, which wasn't too far from where we live. I called the place first, asking what to do, and they basically advised I leave the nest in the forsythia bush so the mother could find her kids. Well, I sat behind the storm door for an hour or more, watching Mama Cardinal frantically hop around, chirping, looking for her babies. She flew all around the front of the house, but the wee cardinals obviously weren't making a sound. So she couldn't find them.

I felt awful, like a baby bird killer. Plus, here in St. Louis where the baseball Cardinals rule, it would have been sacrilegious to let newborn cardinals die. So I called the Wild Bird Sanctuary again (okay, and again and again), until they finally said, "Just bring 'em down here!" I was advised to fill a baggie with warm water, put it in a shoebox, then set the nest on top of it. I covered the whole thing with a soft piece of T-shirt. And I drove to Overland to get the babies into caring hands tout suite.

I was told the babies were a day-old at most, and I worried about them all night. I had promised my mom and my husband that I wouldn't call and check on them. So, the next day, I started to dial a few times but made myself hang up. Until I couldn't stand it anymore and rang the Sanctuary once more, asking as soon as they picked up, "How are the babies? Did they live through the night?" I realized the first 24-hours were the most crucial so when I was told, "They made it, and they're keeping us busy today!" I breathed a huge sigh of relief. And, no, I didn't call again. That was enough for me. I firmly believed they would live.

With the overgrown shrubs gone, (thankfully) the Mama Cardinal and her red hubby mov 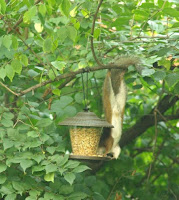 ed into the backyard. We put out a feeder for them filled with wild bird seed (which Squirrelly Squirrel likes to hang by his toes and enjoy way too often--he's already pulled it down twice). Best of all, I saw Mama Cardinal gobble at the feeder and then fly into the pear tree. Soon after, I heard chirping and could just barely see her feeding a wee cardinal. Ed and I witnessed several more tiny bird-lings hopping from branch to branch inside the pear tree not long after. It warmed my heart to think that Mama and Papa Cardinal had another batch of babies after the two lost to them (but saved from the tree shredder). Yeah, I'm a sucker for a story with a happy ending.

P.S. We're on our second feeder (a "squirrel-proof" one this time) after Squirrely Squirrel knocked the first one down for the third time and broke it for good. Muhaha, we humans aren't as stupid as we look, Squirrely Squirrel!
Posted by The Stiletto Gang at 5:00 AM