Why Is This Night Different from All Other Nights? 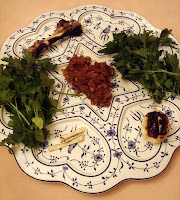 It’s that time of year again.

Wednesday night is the beginning of Passover. We’ll hold a seder, the feast that commemorates the Jews exodus from Egypt. I’ve been cooking and cleaning for weeks, and as I do, sweet memories of seders long ago come flooding back. I smile when I think of those who are no longer with us in the flesh, but whose love, warmth, and wisdom enriched seders of the past.

There’s very little variation in the menu from year to year. Homemade matzoh ball soup is a given. Gefilte fish, homemade in a local deli, is also always served. But since marriage is a blending of traditions, we serve hard-boiled eggs and potatoes as the second course. Why hard boiled eggs? According to some experts, the eggs symbolize the Jewish people. The more you cooked the eggs, the harder they become. So too the Jewish people – the harder their lives, the stronger and tougher they become. Another explanation is that eggs symbolize the circle of life, the salt water the tears of oppression, as well as the joy in freedom. My family’s tradition was just to serve hard boiled eggs. Hubby’s family served eggs and potatoes. I’ve searched to find an explanation for the potatoes, and I’m just guessing when I posit that it’s part of his Russian heritage. Anyone else know the reason?

We sing songs with traditional melodies, passed down from generation to generation. But we also sing songs that my kids learned in nursery and Hebrew school. While we say many of the prayers in Hebrew – we do most of the service in English so that all our guests can participate. We go around the table, with everyone reading aloud a portion of the Haggadah, the prayerbook for the holiday, which tells the compelling story of the Jewish exodus from Egypt, from slaves to free men.

And then there are the family tales that are also annually recounted Here’s one of my favorites which happened when my husband was a child. Let me set the scene.

Picture a table of 20 family and friends. They’ve eaten a wonderful meal and now are finishing up the final prayers of the seder. They’re reached the song about Elijah the Prophet. According to tradition, Elijah visits every Jewish home during the Seder as a “foreshadowing of his future arrival at the end of the days, when he will come to announce the coming of the Jewish Messiah.” The custom is to stand and open the front door while singing this prayer.

The family stands and my husband’s Uncle Bobby opens the front door…and there stands a complete stranger.

Everyone’s heart skips a beat. Was it possible? Was this the Messiah arriving at Baltimore National Pike?

Nope, nothing quite so dramatic. From the doorway, Uncle Bobby quickly realizes that the stranger is drunk and looking for directions to the local watering hole.

But my kids still hold their collective breaths as we open the door in own home – will someone be on the other side?

Best wishes for a Happy Passover,