Cop, Gangster and Me 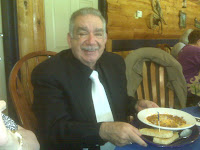 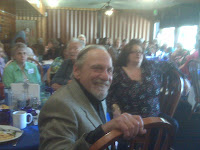 Actually, the cop is retired police officer Denny Griffin who is better known these days as the author of Cullotta, the Story of a Chicago Criminal and Las Vegas Gangster. I met Denny right after 9/11 when hubby and I flew back to Orlando for what was then called the Police Writers Club Conference. (Now Public Safety Writers Association.) Everyone was surprised we were brave enough to fly, but we knew it was safer then than at any other time. Denny's wife had come with him. The conference was small enough that all of us went out to dinner together. We sat with the Griffins and became great friends. Denny's wife, Faith, has since become one of the biggest fans of my Deputy Tempe Crabtree series.

The gangster is Henry Hill of Good Fellas fame (the movie with Ray Liotta was about him). I sat next to and visited with him over lunch. (He's the one with the beard.)

The occasion was the San Joaquin Sisters in Crime meeting. Because I know Denny, I was asked to introduce him and somehow I ended up next to Henry. He is reformed, obviously, and regrets many of the things he's done. Actually, he's quite a charming fellow. He has quite a story to tell, from growing up in New York, wanting to be like the gangsters he saw around him, seeing some of his friends and fellow gang members being wiped out and knowing he was going to be next, becoming an informant, going into the witness protecting program, all the moving and name changes and how hard it was on his family, his marriage failure, and lots of tidbits about organized crime that still exists today.

This is not the kind of stuff I will ever write about, but it was one Sisters in Crime meeting that I drug my husband to that he really enjoyed.

Marilyn a.k.a. F. M. Meredith who is not in the witness protection program nor ever will be.
Posted by The Stiletto Gang at 4:00 AM