Plotting in Your Sleep

The great American author, Edna St. Vincent Millay, once wrote that she couldn’t get the woman onto the porch. What she meant, of course, was that she couldn’t figure out an organically sound reason for the character to do as the plot demanded.

I struggle with this situation all the time. Plotting a mystery is, for me, a combination of architecture and sleight of hand. I lay the foundation, plan the structure, and use language to entice my readers to pay attention to something over here while something else is happening over there, unnoticed. In order for this complex process to flow seamlessly, I need to create characters whose actions mesh with the plot’s development. 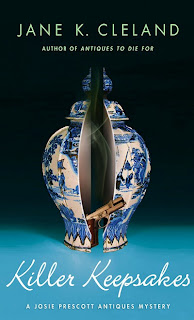 It’s hard. If I have a boorish man, for instance, who blusters and creates awkward moments, certainly my readers will focus on him. But if, later, the plot demands that the character finesse something, I’m sunk. A boorish man who blusters would never finesse anything. Reconciling these two needs—a solid, architecturally sound plot and actions driven not by the plot’s needs but by the characters’ personalities is, for me, the most challenging part of writing.

How do I do it? I don’t know. I don’t know why, when I’m mentally outlining the plot, I know that a certain female character is well-dressed and socially savvy. The fact that she is, however, becomes important later in the plot—she hosts a ladies’ luncheon. It’s a good thing she’s that sort of woman because I needed her to host that event—but I didn’t know that the luncheon would occur when I started to write the book—at least not consciously.

I’ve concluded that much of the intricacy of plotting occurs on some unconscious level. For instance, I know that when I need to resolve something, I get the problem clear in my head just before I go to sleep, and when I awaken—I have the answer. Sleeping on it, for me, actually works when I need to figure out how to get the woman onto the porch. 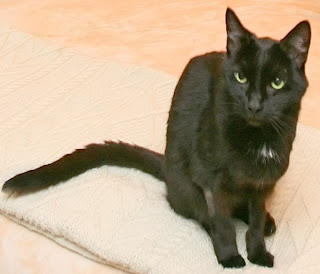 Maybe it’s that my cats sleep on my pillow—sometimes on my head. Here’s Angela, my love bunny, at the foot of the bed.

Jane K. Cleland writes the multiple-award nominated and Independent Mystery Booksellers Association best-selling Josie Prescott Antiques Mystery series, set on the rugged New Hampshire coast, [St. Martin’s Minotaur], an Antiques Roadshow for mystery fans. Killer Keepsakes is the fourth in the series. Ms. Cleland chairs the Wolfe Pack’s literary awards and is on the board of the Mystery Writers of America/New York Chapter. “Josie” stories have appeared in Alfred Hitchcock Mystery Magazine. Her apartment (along with her husband and cats) was featured in a recent New York Times Habitat article. www.janecleland.net
Posted by The Stiletto Gang at 5:00 AM