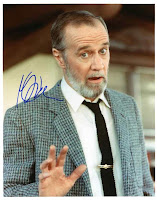 With a tip of the hat to the brilliant, much-missed comedian, George Carlin, lately I’ve been doing a lot of thinking about “stuff.” We’re planning to down-size and move to a smaller house, and my biggest fear is what to do with all this stuff.

Fans well remember Carlin’s famous riff:
That’s all your house is: a place to keep your stuff. If you didn’t have so much stuff, you wouldn’t need a house. A house is just a pile of stuff with a cover on it.

I’m going to skip any of the sentimental attachments that develop when you’ve lived in a house for 20 years. The memories come with you, I keep telling myself.

But OY, the stuff. Consider:

I have my stuff in several boxes marked memorabilia, and includes every drawing made by son number one because after all, he was first born. A few scribbles from son number two, because kids drawings were still a novelty. Apparently son number three and daughter never picked up a pencil because there is nada from them. Plus all their report cards, mother’s day cards, letters from my parents and sister, and probably my high school yearbook, although I haven’t seen it since the last move. There are also cartons of photographs which include duplicates because the drugstore gave you two prints of each photo when they printed them out for you. (Note the archaic concepts in that one sentence: that you didn’t have the photos on a digital memory card, that there was someplace called a drugstore, and that someone other than yourself was printing them out). See, getting rid of stuff means getting rid of the old ways of thinking too.

There are separate boxes of my husband’s memorabilia, although he’s not quite the sniveling ball of sentiment that I am.

There is memorabilia accumulated by each of the kid. For example, I have playbills from the sixth grade production of My Fair Lady. Keep in mind that I sat through all six performances, plus two dress rehearsals, of this musical. Son number one had exactly one line (which I can still repeat): “Mr. Doolittle to see you, sir.” How many copies of that playbill does he need? Also in these boxes are complete collections of all soccer, baseball, hockey, baseketball, “you didn’t win, but you still get a tiny trophy because everyone’s a winner in our town,” fake brass awards times four.

But let’s move beyond my stuff, hubby’s stuff, kids stuff. When parents downsize their homes, you inherit their stuff. When my mother-in-law moved from her home of 40 years to an apartment, she couldn’t bear to donate her late husband’s fishing equipment. There probably isn’t a charity dedicated to underprivileged fly fishermen. On the other hand, these ancient rods and reels have now taken on mythic proportions in my not so-sentimental husband’s memories, so we could move to a studio apartment and in one corner would be three fishing rods and a tackle box. This from the man who hasn’t gone fishing in 10 years – and didn’t use his Dad’s stuff then.

And sadly, when your parents die, and you have to break up their homes, you make snap decisions on their “stuff,” that you then have to live with. For example, consumed by grief when our mother died, my sister took Mom’s pink hairnet. Three months later, with a little clearer perspective, she asked me what the heck she should do with it. It certainly wasn’t the essence of our mother, but it now seemed tacky to discard it. As my sister pointed out, “now that I’ve taken it, I’ve got it,” followed by a heavy sigh.

I admire those who can pare down their belongings to two sets of clean underwear and a change of shirts. I understand their world view that they can more clearly see what’s important and what’s not without stuff weighing them down. I can’t pare it down that much for a weekend trip, let alone a move. I know the concept of dumping all this “stuff” might be liberating, but it’s also exhausting.

What are you doing with your stuff?