Eight is More than Enough 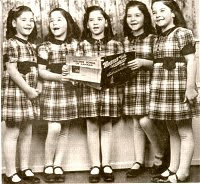 The California woman who gave birth to octuplets last week isn’t the first mother to try and make a buck from her kids. It's appalling but she's already hired a PR firm to field her offers.

Remember the Dionne Quintuplets? Born in 1934, the Canadian government took the girls from their parents and put them on display, as if they were freaks like the two-headed cow in Ripley’s Believe It or Not. Millions of tourists visited Quintland, the theme-park like environment where the Dionne girls lived. Visitors watched from behind mesh screens as the children played twice a day. Quintland was Ontario’s biggest tourist attraction of the era. From infancy until age nine, these children were not allowed to have friends, attend village school, or have contact with their parents or siblings. When they were finally returned to their parents, virtual strangers to them, the Quints continued to be the family money-makers.

I don’t see much difference between the Dionne quintuplets childhood, and a host of reality shows on The Learning Channel which feature families with many kids. In all cases, for the sake of entertainment of the public and in exchange for big bucks for the parents, we have stripped young children of their privacy. In one wildly popular show, nothing of the kids' lives is off-limits – bathing, toileting, tantrums, doctors visits – yep, all caught on tape for eternity. The parents even installed industrial lighting in their home to make filming easier. The adults discuss their offspring on camera as if they were gossiping about strangers. For those who would argue that the children are soooooo cute – since when did we decide that it was okay to use young kids’ real lives to entertain us?

One in six Americans is affected by infertility. Medical treatment gives hope to women who otherwise would not be able to get pregnant. But responsible doctors deliberately limit the number of embryos transferred at any one time. Conscientious medical professionals carefully monitor the number of eggs released when using Clomid (or similar fertility drug) and cancel procedures when there are too many follicles that might result in a pregnancy of higher-order multiples. Good fertility clinics do psychological screening before treatment so a woman who already has six children under the age of seven, one of whom is a special-needs child, would probably not be accepted for treatment.

Children are a blessing. As parents we must treasure and care for each one. As the viewing public, we must put an end to this Hollywood-ization of large families. If their own parents won’t protect the children on these reality shows, it’s up to us to vote with our TV remotes.