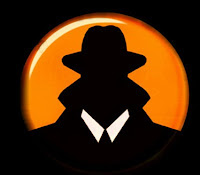 Ned Rust lives with his family in Croton, NY, and works in the publishing industry. His writing has appeared in Rolling Stone, McSweeney's Internet Tendency, The Rocket, and The Stranger.

I work in the book-publishing industry. I can’t really say much about it in public like this because I happen to work in a somewhat high-stakes area, and, as you would have soon guessed from my nervous, backwards-scrambling sentence-structure, I’m deeply paranoid.

I don’t quite blame the industry for making me this way. I’ve only been working in the field for 5 years and there were signs I was given to an inflated sense of self-worth (i.e., people MUST be interested in finding out more about me) and over-caution from before. Like how I compost any piece of mail that has my name printed on it. Yep. Right in there with the coffee grounds and the watermelon rinds. I have a theory that the identity thieves will find my fly-infested compost bin as malodorous and generally daunting as my spouse and children do.

Except when companies use non-biodegradable stickers—“Affix this to your mail-in coupon for a free bonus subscription to Yachting for Kids!”— everything works out pretty good. In fact, the years have proven that promotional offers—and letters from my parents I can’t bear to look at—nicely balance the “wet” compost of kitchen scraps. With time and stirring, you’ll have a lovely loamy—and, importantly, informationally secure—mix within six months.

But there are things within the publishing industry, as you may have discovered yourself, that could begin to make even a well-balanced person paranoid.

I could go on and on, but this is my first ever blog entry and prudence tells me I should maybe start with just one topic. Beyond composting, I mean, which I don’t expect is what Maggie and Evelyn were expecting from me.

So let me touch on one topic that’s near the beginning of the publishing alphabet and never fails to make me look over my shoulder—agents . . . literary agents.

I mean why do they even call them agents? Who else is an agent? Insurance people (creepy). Internal Revenue Service folks (creepy). Operators in the MI5, ATF, CIA, OSS and FBI (I rest my case).

And what do they do? You don’t go to school for it. You don’t need a license. There isn’t even an accreditation or support organization for them—like lawyers have the Bar Association—at least so far as I’ve heard. I mean have you ever seen a news story about a literary agent getting defrocked by her or his peers?

Maybe part of the problem is they don’t seem to do anything they might even have to bother putting on a frock to accomplish.

So far as I can tell—and I should confess I don’t have a lot of direct dealings with them and that I know one or two who seem lovely in person—agents need 2 principal things to make a living:

1) Enough paralegal-level savvy to hoard and be conversant with the appropriate legal forms and contracts to make writers promise to give them a hefty portion of any money they might make and to understand that the generally guile-less publishing houses aren’t taking any legal advantage.

2) The ability—through experience, charm and, or, connections—to get calls & emails answered by the people who acquire manuscripts and sometimes by those who market the finished books at the publishing houses.

The rest of it—recognizing good writing, answering the telephone occasionally, light xeroxing, brushing one’s teeth before going out in public—most of us regular folk have down.

But somehow they keep on doing their thing. Even now, in the 21st century, they’re taking often double-digit percentages out of author’s and publisher’s hands.

I mean, isn’t that a weird system? And there’s like, no transparency whatsoever. So you never know if like Agent Y is brother-in-law to Publisher X.

And you never really know if Agent K really does have your best interest at heart and thinks you could be BIG, or whether he’s just treating you like a mineral claim that may or may not prove to contain valuable gems but the land’s so dang cheap, why not just go ahead and put a binding deed on it so nobody else can do anything with it?

Oh well. I don’t really have anything specific to point at, but the whole scene just makes me nervous. Speaking of which, I think I hear somebody out at the composter.

New comments are not allowed.