Smoking and Not Smoking

Kaye Barley is an avid mystery reader and Dorothy L poster who lives in the beautiful North Carolina mountains with her handsome husband of 22 years, Donald, and their faithful companion, Harley Doodle Barley - the cutest Corgi on God's green earth.

Just taking it one hour at a time. But I think I have it licked.

The Stiletto Gang has invited me to talk about it, so I’ve decided to come clean with why I decided to quit.

During a conversation with a girl friend living in Maryland, a bell went off in my head when she mentioned that Maryland was becoming a totally smoke-free state. I’m going to be in Baltimore for a week. In a hotel. Unable to smoke. For a week. EEK! This is when I started having the same nightmare night after night.

It just seemed easier to try to quit. 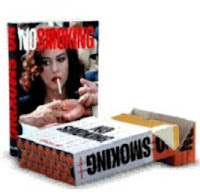 When Evelyn invited me here, I decided to do a little light research, which meant a stop at Amazon.com to see what books I might be able to find to start me off. I found “No Smoking” by Luc Sante, which is an interesting book whatever your views and feelings are about smoking. First of all, the packaging had to have been thought up by a marketing genius.

Secondly, I think the book gives a fair, fun and interesting picture of what an important part of our culture cigarettes once were. As “No Smoking” points out, there was a time when the whole world smoked. 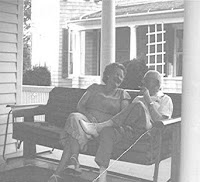 My parents are both from large families and to the best of my recollection, everyone smoked except my Aunt Belle. My earliest memories include huge family get-togethers with kids running wild in big backyards while the grown-ups sat at picnic tables eating, drinking and smoking. Each of them keeping a close eye on all the kids, each of them always available for a hug, and each of them recognized as a constant source of deep affection, offered up in equal parts of nurturing along with life lessons, and rules to be learned and followed. These are treasured childhood memories that come to mind often, and always bring a smile. They’re times my family recall with love and laughter.
At the head of one of the tables my much adored grandfather, Pop-Pop Wilkinson, would preside with either a cigar or a pipe, and it was his attention we all vied for.

Cigarettes were everywhere. Were there any movies made in the 40s or 50s in which people weren’t smoking? How many of us still think some of those were the greatest in the history of film? As opposed, maybe, to the graphic blood and guts violence we now see in movies? Is watching that healthier for us and our children than seeing Audrey Hepburn smoke a cigarette in Breakfast at Tiffany’s?

And it wasn’t just the movies. Great mysteries had good guys and bad guys smoking up a storm. Nick & Nora Charles “wore” their cigarettes as part of their elegance. We have a few protagonists smoking in today’s mysteries, but most of them, like Elaine Flinn’s Molly Doyle, and Kathryn Wall’s Bay Tanner, are in a constant battle with themselves in an attempt to quit. In I. Van Laningham’s short stories, Andi Holmes successfully quits. Bill Pronzini's Nameless Detective starts out a smoker. If the protag isn’t trying to quit, he/she is most likely one of the bad guys, as is the case of Ken Lewis’ Curt LaMar, in “Little Blue Whales.”

Who can imagine Frank Sinatra on stage singing those torch songs without that cigarette? We may not see singers on stage with a cigarette in hand any more, but does it really mean they’re all living a cleaner, safer lifestyle? And why is it the world’s business anyway?

I was never one of those people who fantasized about “if only I could quit.” In my mind, my future was me being this feisty old woman flicking ashes on anyone who might even suggest I put my cigarette out while in their presence. Driving my scooter hell bent for leather all over the Wal-Mart parking lot, daring anyone to get in my way, smoke billowing around my head like it once did Pop-Pop Wilkinson’s

To those of you who don’t smoke - believe it or not, there are some people who don’t want to quit. That’s their choice. And there are the people who are trying desperately to quit but just haven’t yet been able to. I’ve been one of the lucky ones, I think. I’ve had tons of support. Lots of phone calls, and some awfully nice cards, and notes and email from people offering encouragement. It’s meant a lot. It also meant a lot that of all the people who took the time to write, no one preached at me. Praise glory and thank you for that.

If you’re a non-smoker and want to help those you care about stop smoking, try huge doses of patient kindness. I can promise it’ll work a lot better than a constant negative pounding. Smokers already feel like the latest in a long line of persona non-grata. The lowest of the low. The only one lower might be a person who smokes while wearing a mink coat. Let’s all feel free to stone that poor dumb clod to death. And while I’m on this little rant (I love to rant), why has the government, at any level, gotten involved in our business about this? To protect the health of non-smokers? I’m sorry, but really. Smoking laws coming from a government who can’t clean up the air or water from industry pollution? Let’s see. The EPA was created when? 1970? Gloriosa, don’t even get me started.

With the help of a prescription written by my doctor, it really hasn’t been too tough. Not as tough as I thought it might be. Tough enough though, that I hope I make it this time ‘cause I’m not sure I’d do it again. 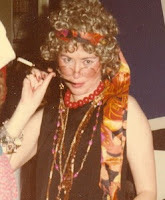 So, you people who think the whole world needs to hear what you’re saying into that cell phone of yours? If you see me smoking – please try to have this number handy - 1-800-424-8802. That’s the number for the EPA National Response Center. It’s the number you call to report an environmental emergency. Better to do that than tap me on the shoulder to give me your opinion about my smoking.