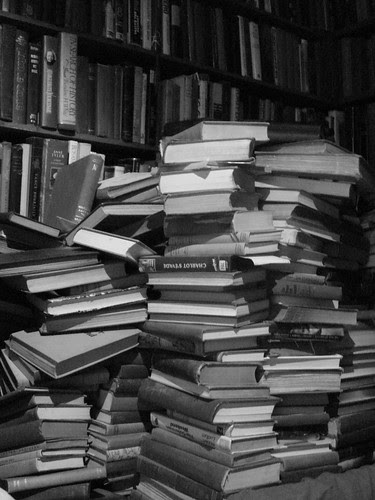 When Maggie asked me to be a guest blogger, I thought, does she think I’m a Qwilleran, snapping off 1000 words on any subject?!? Just give us a librarian’s perspective, she said. Anything you want to say, she said. So, I’ve decided to use the opportunity to finally admit that I pretty much read only mysteries, and very little else. Not an earthshaking revelation, except that I’m a librarian in a small but busy library, and not a day goes by without someone asking me if I’ve read this or that piece of serious fiction, some good book that I, of course, should have read. There is a presumption that my literary choices must be of a higher caliber (when the only caliber I’m interested in is that of a murder weapon). The truth is, I’m a mystery fan, and I have eyes only for the New Mystery shelf. I get a little rush when I see the latest installment in a favorite series (Anna Pigeon and Magdalena Yoder are waiting for me even as I write this).

The appeal lies in the fact that mysteries most often appear in series, and liking the first one generally means liking the rest. The characters become more familiar with each time out, until they feel like old friends. I’ve been from “A” through “T” with Kinsey Milhone and Emma Lord; mentally consumed a million calories with Hannah Swensen and Goldy Baer; fished on Martha’s Vineyard with J.W. Jackson, and gone back to school with Alison Bergeron. A new entry in a series is like that ubiquitous Christmas newsletter, only way better; it’s a lot more fun to hear what’s been happening with Kate Shugak in Alaska than, say, the old high school pal you haven’t actually seen in 20 years…

Mysteries make great travelogues, too. Skip Langdon’s New Orleans provided a great preview for my trip to the real Crescent City. Seeing Boston from Carlotta Carlysle’s cab was much easier than driving myself. I haven’t yet made a trip to California, but I feel like I’ve been to San Francisco with Sharon McCone and Berkeley with Jill Smith. Martha’s Vineyard, Nantucket, London, the Cotswolds, Texas, and Maine are all the locales of favorite series, and it feels like returning home when I settle in for a good read.

I have a special fondness for mysteries that revolve around food. As an inveterate cookbook collector (my personal holdings are getting close to the 2000 mark), I just love following the misadventures of caterers like Madeline Bean and Faith Fairchild, both of whom can’t seem to carry of an event without finding a corpse between courses. Savannah Reid solves her cases only after indulging in full-fat, sugar-laden southern desserts. And nobody does Kansas City barbecue like Heaven Lee, even as the body count rises. Very satisfying reading…

By now, you’ve gotten my drift. There are as many reasons to love reading mysteries as there are mystery series to read. And, as much as I should want to read the much-acclaimed must-read serious works of fiction that the literati tout, I find myself reaching for yet another mystery with that little tingle of anticipation I get each time.

The nice thing about working in my library is knowing that a couple hundred of my best customers feel the same way.