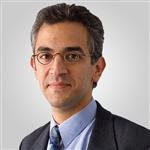 Sigh. I still crush on the geeky ones. I think pocket protectors can be sexy.

My newest heartthrob is Richard Wolffe, a Newsweek columnist and commentator on Countdown with Keith Olbermann (who I could crush on a little too). Wolffe is British and has a little lisp, but he's so damn smart, with a particularly dry English sense of humor, that I can't help but gush and blush a little when he appears on my screen.

Or how about Chuck Todd? Political director for MSNBC. Slightly overweight, weird goatee, same haircut that he had in his high school graduation picture, but with a brain that can crunch numbers faster than NASA engineers. But here's what makes him swoon-worthy. He has the ability to explain in words I can understand just what all those exit polls really mean (if anything at all). Plus he seems to have the patience of a saint. He has yet to reach through the screen and throttle Chris Matthews, the pundit who won't let anyone finish a sentence. See, that's what makes Wolffe, Olbermann, and Todd my homeboys. They know they're smarter, even if Matthews is louder.

I've always liked the ones who could walk, talk, and chew gum at the same time. Forget the World Wrestling Federation. I envision caged verbal matches. Let me see my boy Richard versus Bill O'Reilly. Let me tell you who'd be wearing that gold, championship belt.

It's why I'd choose Hugh Laurie over Brad Pitt; Han Solo over Luke Skywalker. I loved a short-lived tv show: Beauty and The Beast, and had no trouble figuring out why the heroine would opt for the sewers and the hairy monster over all the studs walking the streets above. For West Wing fans, I hearted Josh Lyman over Sam Seaborn, and always preferred Toby Ziegler, the dark, brooding, but balding speechwriter over all the pretty boys.

It's not an either-or proposition. You can get brains and good looks (ahem, I married one of those). But to quote that great philosopher Judge Judy, beauty fades, but dumb is forever.
Posted by Dea, Kia, Jake at 5:00 AM