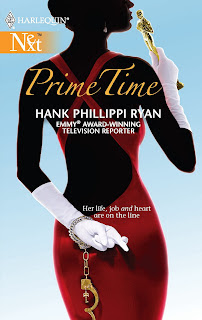 Award-winning investigative reporter--and now Agatha nominee--Hank Phillippi Ryan is currently on the air at Boston's NBC affiliate, where she's broken big stories for the past 22 years. Along with her 24 EMMYs, Hank’s won dozens of other journalism honors. She's been a legislative aide in the United States Senate (working on the Freedom of Information Act) and worked at Rolling Stone Magazine with Hunter S. Thompson. Her first mysteries, Prime Time and Face Time, were best sellers. Air Time and Drive Time are coming soon from MIRA. And this just in: Prime Time is an AGATHA nominee for Best First Mystery.

Thirty (or so) years ago, when I was just starting as a TV reporter, my first news director (think Lou Grant) gave me some advice that baffled me at the time. He said, “The hardest part about writing a news story is deciding what to leave out.”

And now, writing mysteries, isn’t it the same?

When I finished the first draft of Prime Time, I joyfully took the floppy disk with my dear first novel on it to the Kinko’s down the block from Channel 7. “Could you print this for me?” I asked. I lowered my eyes, then looked modestly back up at the copy kid. “It’s my novel.”

“Sure, lady,” he said. Not that impressed. But I was—exultant—that soon I would soon see my very first manuscript printed out on actual paper.

Two hours later, I returned as instructed. This time the kid said, “Oh, you’re the one with the novel.” “Yes,” I replied, fluttering my eyelashes, wondering if maybe he had a sister or mom who would eventually love it.

He bent down under the counter, and pulled out a ream box of paper. “Oh, thanks,” I said, and turned toward the cash register.

“Hang on,” he replied. He leaned back down under the counter, and pulled out another ream box of paper. “Here’s the rest of it,” he said, placing it on the counter. “Guess your book’s pretty long.”

I had neglected to number the pages. But, turned out, it was 723. Seven hundred and twenty three pages.

And that meant Four. Hundred. Pages. Had to go.

Which brings us back to my news director. He was right again. I had to decide which of my precious words to leave out. More on that in a minute.

But you know why. Those deleted scenes—and the reasons the director gives for cutting them—are a little private seminar-on-the-couch on how to decide what to leave out. It works for movies, it works for our mysteries.

For instance. One scene by itself was perfectly good. But the director explained it had to be cut because it would slow the action.

In my head, I rewound, and played that part of the movie back including the deleted scene. He was right. It would have dragged.

He moved on to another very well-acted scene, where two characters slowly learned more about each other. I don’t think I imagined the regret I heard in his voice, as he described how tough it was to inform the actors that this emotional and well-shot scene was going to hit the cutting room floor. But, his analysis showed, nothing was really learned. The plot wasn’t advanced. Sorry, guys. Cut.

Finally, he showed a scene near the end. It took place in a living room, where a phone call brought good news that a missing father was coming home, and the viewer saw that his son had been born in his absence. It was sweet and touching.

Nope. It pulled the punch, the director said. How much better, he explained, to pick up the action with the father arriving home. To have the viewer see the baby—for the first time—at the same time the father did. Yes, of course. Much better.

Deleted scenes. The director loved them when he shot them. But—even more-- he loved what was left without them.

Of course, part of the difficulty with cutting is fear. Fear you’re going to ruin something. Fear you’ll never be able to put together words so nicely again. Fear you’ll cut the wrong thing.

But you’re the director in your mystery, right? You yell ‘action!’ every time you begin to write. And the characters (sometimes) do what you say. Part of the fun of cutting is seeing the sleek, fast-paced page-turner that emerges--as you begin to compile your own reel of deleted scenes.

It’s your power. Your strength. Decide which words to leave out. Do it. You’ll never miss them.