Where Are My TV Shows? 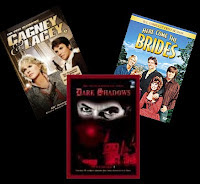 Ever since I was old enough to understand that those tiny people in the box were telling me stories, I've been hooked on television. And each year since I was about five years old, I've had a couple of favorite programs; my shows. Something I looked forward to each week, my little escape from a not-so-glittery reality.

My brother and I used to watch Dark Shadows, hiding behind a blanket on the sofa, knee socks tied around our necks to prevent vampire bites and drinking cold sweet tea in goblets - to mimic Barnabas's brandy snifters

For my shows I've given up much and suffered mightily: I've done chores early so I could watch the original Cinderella; rushed through homework so I could see the Big Valley; fought bloody battles with my sibling for control of the tv remote (and before that the tv knob) so I could watch Here Come the Brides and Emergency; skipped high school play practice to watch the movie Sybil; developed 24-hour illnesses so I wouldn't miss a minute of a Cagney & Lacey marathon; considered changing my major in college so I wouldn't miss Ryan's Hope; and warned people I would not be answering the phone or door or tolerating any conversation whatsoever during my Wednesday night episode of The West Wing.

And today? I love Medium when I can find it and remember the day it's airing. Where has all the excitement gone? I mostly channel surf now. Remember the thrill of getting the Fall Preview edition of TV Guide? I'd pick out my new shows for the year by pouring over the blurbs and photos. Then I'd fix my tv watching schedule with the skill of an air traffic controller – my old favorites plus four or five new ones that I would sample. If I didn't like the new ones, there was always time to give the second stringers an audition.

Not any more. New shows come and go within the first couple of airings. The older shows don't stick to any discernable schedule. And if you miss an original episode because of breaking news, weather advisories, or power outages? Don't count on seeing it during the summer reruns. Reruns are scattered during the regular season and the summer has morphed into a reality-tv nightmare.

I admit it. I love dramas and light romantic comedies. I'm not entertained by watching people eat fresh cow tumors or some other stomach-churning oddity. I don't like watching people being ridiculed by other people. I want the good guys and gals to win; the evildoers to get their just rewards; and the hero and heroine to ride off into the sunset at the end.

Where are my tv shows?