Living With a Mystery

In October of 2018, some friends of mine and I met up at a shelter on the Upper East Side in Manhattan to look at cats. The giant, brand new ASPCA shelter was closed down for reasons the website wasn't sharing, so we were at another city shelter -- along with everyone else, it seemed. I met up with my friend, let's call her J, and her two teenage twin daughters. The girls immediately went to look at all the animals, and were already getting misty eyed about the ones that might not be going home with anyone. 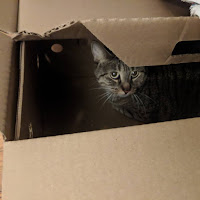 But me, I was on a mission: I wanted to get a bonded pair of kitties, one of them possibly being black since I've heard that black cats are still harder to adopt out. (Though it seems that this may be a myth, there were a lot of black kitties up for adoption.) I wasn't sure if I wanted kittens or adult cats, but I knew I wanted cats under the age of six. I was still grieving the loss of my beloved Oscar, and wasn't ready to take on senior kitties that maybe had health issues.

But while there were lots of tags talking about bonded kitties, it was soon obvious that the shelter wan't actually focused too much on keeping them together. I was told by a volunteer that if both cats seemed social, bonded pairs would be separated and adopted out  individually, in order to give them their best chance at being adopted. I was also told that if you wanted to get a kitten you'd better show up early, much earlier than we had. 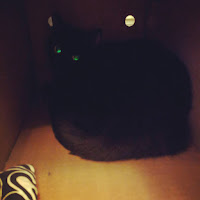 So we wandered around trying to find what I was looking for, and I was starting to think I was going to go home with a single cat (since, unless they are bonded, most shelters won't let you adopt two adult cats at once).

Then, the teen girls spotted them: two kitties, stuck in the less glamorous cages in the middle of the hallway, where the "special case" cats were. Two cats, whose cages had been connected, were curled up together, their backs to the world, their ears flat, trying everything they could to get away from anyone who tried to look at them. They were so terrified that the shelter volunteers draped towels over their cages to give them some privacy.

They were the only intact bonded pair in the place, and one of them was a black kitty. Here! the teen girls said. We found what you were looking for!

The problem was, they were too scared to do any sort of visitation, and too scared to even try to say hello to without hissing. Adopting these two cats would be adopting complete unknowns. 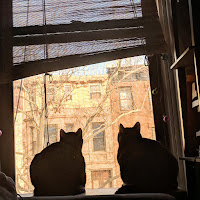 A couple I kept seeing around looking at kitties pulled me aside. Are you looking at those two cats? They are our second choice. We'd be really happy to see them go to a happy home. They are very sweet -- we can tell!

So now I was getting big teenage girl eyes, and mopey couple eyes (they ended up going with a pair of cats that had some health issues and couldn't be taken home that day), and these two cats who scrambled at the back of their cages when I tried to say hi to them.

So, of course, I adopted them. Brooklyn, a tabby, and Savannah, a black kitty.

The only thing the shelter could tell me was that they were owner surrendered and about four years old. Good health -- a little overweight, and some teeth issues typical of their age. 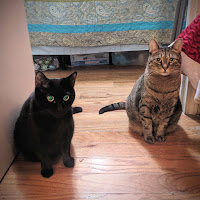 The teen girls and my friend helped me carry them home to Brooklyn, no small feat while holding two cardboard carriers that had to be held just so or they might fall apart. When I got them home, they stayed in their open boxes until the next day, when they found hiding places in the living room. I consulted a friend who fosters cats who said to take them out of their hiding places and put them in the bathroom -- the living room was going to be too much for them. I did, and it was a traumatic event for all three of us.

Eventually, after trying to figure out if I should change their names, I landed on calling them nicknames of their original names: B.K. for Brooklyn, and Savvy for Savannah. Slowly, they started to come out more, and spend time near me more, and eventually even let me pet them more. 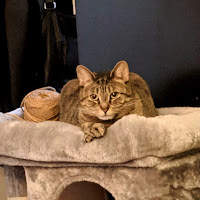 When I went to make sure their microchips were transferred over correctly in my name, I found out that they were listed as lost. The shelter had updated all my information, but hadn't updated their status. I found out they were born in 2014, and listed as lost in 2015, and then owner surrendered to the shelter on their birthday in 2018. As far as what happened to them in between or what their lives were like, I have no idea. Savvy startles at the sound of an opening can. Maybe that means something, maybe not. Both do not like to be picked up (yet). It's been four months and they are just now able to sit either on my lap or curled up next to me, and they still run away if I walk in their direction. Maybe this is all about the trauma of being relocated. Maybe they are just naturally more skittish than some cats. Maybe something I will never know about happened to them.

In the meantime, we keep working on building trust together. In a weird way, I feel like we are all working through grief together, me getting over the death of the cat I had before them, them getting over the humans they had before me. Bonding wasn't instantaneous for any of us, with me learning to love them as unique creatures over time and getting used to their specific personalities. Savvy plays fetch and curls up next to me in the bed but is more shy of strangers. B.K. is more curious and brave in general, and likes to sleep by my legs -- she wouldn't let me touch her the first month, but so far is the only one of the two who can tolerate being on my lap.

I still wonder -- and probably always will -- about the life they left behind. But I am very glad that we all found each other, even when their sibling rivalry acts up, or they meow loudly in the night just for attention. Theirs is the kind of mystery I can learn to live with.

J.M. Phillippe is the author of the novels Perfect Likeness and The Christmas Spirit, the sci-fairy tales Aurora One and The Glitter of Gold (part of the Galactic Dreams boxed sets) and the short stories The Sight and Plane Signals. She has lived in the deserts of California, the suburbs of Seattle, and the mad rush of New York City. She works as a clinical social worker in Brooklyn, New York and spends her free time binge-watching quality TV, drinking cider with amazing friends, and learning the art of radical self-acceptance, one day at a time.