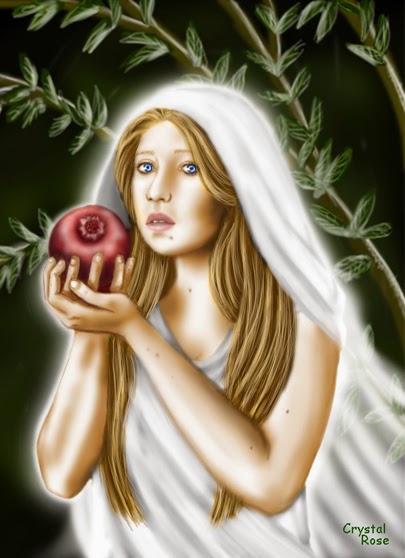 I’m working on a new novel project that I find very exciting. So as we begin this new year, I thought I’d give you a taste of the original journal entry that led to this project. These words were seeds that have grown into a sapling that’s on its way to major tree. As is the way of seeds, these seeds don’t look much like the sapling and will resemble the grown tree even less, but this is what the absolute beginning looks like.

Living on the surface, focusing on externals and other people’s needs, instead of the internal world of images, ideas, imagination, that is my home when working well. And it takes some time after an external surface period with others to regain that internal world and its productive state for creative work.

I wonder if Persephone encountered something similar in trying to adjust to her mother’s above-ground world and her abductor-husband’s dark underworld of the dead, cycling between life and death, between worlds, bringing life to the world above when she came and taking it away when she left. I wonder if she did the same to Hades’ kingdom, bringing light and life when she came and taking it back when she left for the surface. If so, no wonder he kidnapped and trapped her.

Thinking about it that way, you can almost have sympathy for Hades. That longing for light and life and warmth that he has never known because the moment he touches a mortal, no matter how alive and beautiful, she turns stiff and cold with all the life and life and substance gone. After centuries of that, he would become desperate enough to chance the anger of the other gods, even that of Zeus himself, to have his own bit of life, warmth, light, beauty.

Imagine an epic poem written about Hades’ abduction of  Persephone, the angry grief of Demeter, the trick with the pomegranate when Zeus forces a truce, and Persephone weaving back and forth between life and death, the sunlit world above and the realm in darkness below the surface, mother and captor/husband, always bringing light and life below and trailing vapors of darkness and death above, never truly one or the other since Hades tricked her into that bite of pomegranate, never completely alive or dead, always outside and forced to mediate between two tyrants who would destroy their worlds and all within if they lost her.

Perhaps after eons, someone, perhaps Prometheus on his eagle-high rock, tells her that this all works only because she unconsciously assented to it. If she decides to consciously say no to the deal, she can choose to be one or the other, her mother’s or her husband’s. “Or neither?” she asks. He doesn’t know, that would take some special working, to make a choice that included neither Demeter nor Hades, as it would probably bring about the destruction of both worlds.

So Persephone begins to spend her time in each world searching for someone who can show her a way out of the dilemma she’s impaled upon. And this will mark the beginning of her coming to truly know each world and its people, out from under the powerful shadows of mother and husband. In the process, she comes to love and value each world and those in it and to find that she can be free only with the probable destruction of each creation.

I’m writing a novel and not an epic poem, and many other characters have and are coming into play. But this little fragment from my journal was the seed from which this much-transformed book is growing.

I hope you plant a lot of wonderful seeds—and even some strange ones—in this new year.