Professional Jealousy is not attractive

With tomorrow being Valentine's Day, I had this cute little post planned, typical romance writer style. But like a lot of America, I've been glued to the Olympics and then something happened that I haven't been able to get out of my mind. Professional athletes dissing on other professional athletes. As in the Shaun White thing. 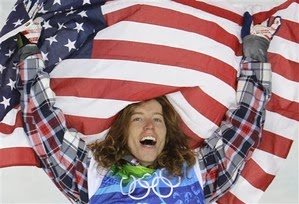 In case you're not familiar with Shaun White, he's an American gold medal Olympic Snow boarder. Four years ago he was the talk of the Olympics. He made snow boarding an Olympic sport to be reckoned with. He put the sport on the map. Made lots of money. And paved the way for other snow boarders to make lots of money. Heck, he even made ME want to snow board. And I don't like the cold!

Sadly, this Olympics have been a different story for Shaun. It began when he pulled himself out of one of the first snow boarding events. The one where they go down this cool looking slope and do all these loops and things. Yeah, you know. That event. Then the tweeting began. Other snow boarders mocking Shaun White saying he only pulled out because he knew he couldn't win, etc... And then Tuesday's debacle. Shaun, who was expected to win the men's halfpipe, came in fourth. As in, no medal. And then the tweeting and nasty remarks got kind of vicious. Professional (and I say that loosely) athletes gloating that their king had been dethroned.

Now, I don't know Shaun White personally. Maybe he's a jerk. Maybe he's a nice guy. But regardless, it's sad to see athletes dissing on one another. Especially in the world arena.

I hope as writers we're above this kind of behavior, but I've seen stuff like this happen in the publishing world too.