Plotting or Plodding, or Both?

About a month ago, I began noodling with an idea for a novel. I started writing in a notebook, with a cover that had the phrase: “Wherever life takes you--trust your journey.” Following that advice, I started generally with entries about what I would like to write. I had a strong idea for a protagonist and gradually figured out the people who surrounded her.

On the fourth entry, I heard my protagonist’s first words: “I am a relic.” And then, her best friend’s response.

I continued on the journey and finally had a chronology for the opening scenes of the novel, which I sketched out in another notebook, then began examining the timeline more closely in the notebook containing all the other entries.

Finally, I managed to name the central characters. While I still hadn’t written out the opening scenes, I found myself developing one where the protagonist is talking with her best friend about a choice she made and action she took. The best friend disagrees with her decision and is worried about how it will play out.

As the two characters talk, the scene becomes lengthy. It provides a perspective about the relationship between the two friends. Because they indulge in mojitos, the protagonist stays over at her friend’s house. She’s roused once in the middle of the night and can’t figure out why.

I’ve progressed through several scenes without going back to write the beginning. The other day I made some discoveries about the characters that I wasn’t expecting.

As I contemplated what I’d learned, I wrote: Amazing where the writing journey takes you. I had been wondering how the scenes with such long conversations would evolve and was surprised by what I discovered. Sometimes, when you’re wondering if the winding road is worth traveling, you find the trip astonishing. All it required was to keep plodding forward with a general goal in mind, flexible enough so any unexpected shift didn’t bump you from the trail.

When I wrote “plodding,” I wondered if that was the synonym or antonym for “plotting.” I decided both plotters (who plan out their stories before writing them) and pantsers (who observe the emerging plan as they write their stories) depend upon plodding, as in moving forward. I think what worried me at first was the idea that plodding is often associated with the uninteresting, the pedestrian. But, I think it’s more important to think of those gently clomping horses’ hooves progressing methodically toward a target.

I remain concerned that my scenes are more talk than action, but I know I can fix that. Maybe for now, I just need to hear my characters tell me what they know. 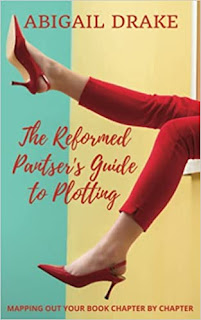 Also, I’ve just purchased and started reading Abigail Drake’s The Reformed Panster’s Guide to Plotting. Abigail, author of seventeen novels, presenter of writing workshops, and facilitator for Ramona DeFelice Long’s continuing Sprint Club on Facebook, wrote this book after being asked to deliver a seminar on the topic in West Virginia. Released October 7, 2021, and 86 pages in length, it is an excellent discussion about how to plan a work of fiction, chapter-by-chapter. At the end, an appendix outlines the overall process. Drake’s book works for building a novel as well as for analyzing how to revise a novel.

I have to admit, it’s great to “plod” forward with a terrifically supportive guidebook, which describes Drake’s book. I recommend that you try both.