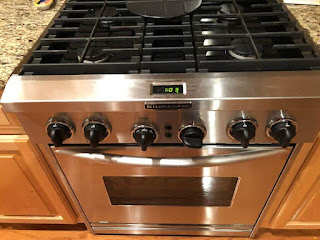 Watch Out – the Frying Pan is Armed! by Debra H. Goldstein

We all know that I’m not Suzy Homemaker, but this time even I don’t know what I did. I hope some of you out there can tell me how I blew up my favorite frying pan.

As you recall, during the pandemic, I’ve cooked more in the past year than in the previous thirty-seven years of my marriage. So far, I’ve learned that if I see an F3 or an F8 in the digital portion of my stove, the oven is either on fire or I’ve blown the contraption’s brain. This time, because the stove didn’t send me a digital message that I can google, I’m at a complete loss.

Lately, to make my life a little easier, and because it is easy for me to follow simple directions that come with pictures, I’ve been having two to three dinners a week delivered from Home Chef. They have proven relatively easy to make and what they send seems to be of good quality and more than enough for two bulk eaters. The only thing is that rather than broiling or baking, many times they have you use a non-stick frying pan and a drop of oil to make parts of the meal.

Okay, picture this. I’m frying two boneless chicken breasts in a drop of oil in a non-stick pan for 5-7 minutes per side on medium heat. Suddenly, I hear a bang like a gun being shot. I have the sensation that something flew upward, but I can’t really say I saw it. I did notice the gas stove’s flame leap up a drop, but nothing alarming. With the exhaust fan turned up a notch, I continued cooking. The same thing happened again, rattling me. I couldn’t see anything that seemed out of place.

I plated the meal – brussel sprouts made in another pan and the two wonton breaded chicken breasts and we began to eat. Suddenly, I noticed something silver on my plate. Definitely not the color of a brussel sprout or chicken - and it was metal. Could it be a flattened bullet? I pushed it aside, checked for any more metallic items on my plate, and finding none continued eating. After the meal, I looked in the frying pan and saw a twin metal button. I examined the frying pan and realized they were the caps from inside the pan that covered the screws. They’d blown off (and probably up).

I’ve used this frying pan for months without being attacked or sabotaged by it. What do you think happened and is it safe to continue using the pan?