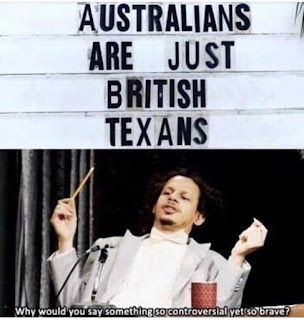 You know how Madonna now talks with a British accent?  And everyone kind of mocks her?  It is annoying to have someone you know grew up in Michigan try and sound all posh, but at the same time… I would be the same way.  I once realized that I had been watching twenty minutes of a cooking show with an Australian host and I had no idea what was being made.  I’d spent the entire time watching her mouth trying to figure out how she was murdering pronouncing her vowels that way.  I sounded like a monkey on the couch as I clenched and unclenched my teeth trying “ehhh-oooh-uh” my vowels.  I was two seconds away from throwing a shrimp on the barbie when my husband came home and gave me the look that implied that while our marriage was a joy and a blessing, it was also occasionally weird.

The unfortunate thing is that, just as I’m addicted to copying other people’s accents, I find that I’m also prone to picking up the language of whomever I’m reading.  I’m sure my writing/reading group can tell when I’ve been reading Regency Romances.  One cannot help but be addicted to the opulent turn of phrase.  And if I could work some sort of line about puce satin and a cravat into the paragraph all the better.  What if I’m reading fluffy chick lit?  Pretty sure that my character needs to mention her thighs and a cupcake in the next sentence.  Taut thrillers? Sentences get shorter.  Characters become brutal. And adverbs?  Kill ‘em.  Kill ‘em all.

The brutal snuffing out of “suddenly” aside, this habit does real damage to my narratives.  Characters don’t sound like themselves (why does that Texan sound English?) and plots can veer wildly off course as I spend a page (or three) describing clothing.  So when I’m writing I have to take a bit of a hiatus from reading unless I can find that wondrous book that matches the tone that I’m writing.  I think it’s incredibly unfair that my reading has suffered as a result of my writing, but currently it’s a sacrifice I’m willing to make.  Of course, if I could just figure out how to retire with a million dollars so that I could segregate my year into reading quarters and writing quarters life would be awesome.

Bethany Maines is the award-winning author of the Carrie Mae Mysteries, San Juan Islands Mysteries, The Deveraux Legacy Series, and numerous short stories. When she's not traveling to exotic lands, or kicking some serious butt with her black belt in karate, she can be found chasing her daughter or glued to the computer working on her next novel. You can also catch up with her on Twitter, Facebook, Instagram, and BookBub.