The Path Through the Forest of Words

Writing is both hard and easy.  Like a lot of things, it's a relatively simple process that is accessible to just about everyone.  Sit, type, repeat, and you've got a book.  Also like a lot of things, doing it well is something that takes years of practice and refinement. And the better you do it, the less the effort is apparent. Good writer's make writing seem easy. From the effortless flow of a sentence to the way the plot of a book doesn't strain to contain it's characters, but seems to come directly from the characters themselves. But what can elevate clunky sentences to art?

I'll be giving a guest lecture in a few months to some high-school students on the topic of writing a mystery.  I love connecting with kids and I'm really looking forward to this class, but it got me thinking about how to teach such a thing.  I've been known to teach a variety of things—how to write action scenes, karate, how to pee in the woods. According to my daughter, who was four at the time, that last one is not my strongest topic. But like any skill, there are ways to breakdown each skill and pass on that recipe to the next person. Even if some small children don't want to listen to you, not peeing on your underwear is still an achievable goal.  As is writing a mystery.  But can I teach someone how to write a good mystery?

As I have pondered the ins-and-outs of good writing and mystery's and teaching I've come to the conclusion and I don't think I can teach someone how to write well.  I can teach someone how to be competent and I can give them an entire toolbox of tips and tricks, but I think in the end the only person that can make a writer write well is... the writer. I think that it really comes down to the practice and ambition of the writer to push themselves beyond craftsmanship and into art.

I hope I’m on the path to art as I wander through the forests of words, but I have to admit that on some days, the best I can say is that I didn’t pee on my underwear. 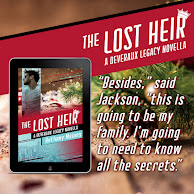 Writer Update: The Lost Heir – The Deveraux Legacy prequel novella is now available! Catch up on all the Deveraux family dirt.

Jackson Deveraux was orphaned, abandoned and imprisoned, but life is about to hand him a second chance and a new family. Eleanor Deveraux lost her children in a plane crash and she’s in danger of losing her grandchildren to the Deveraux Legacy of drugs, abuse and secrets, but life is about to hand her Jackson. When Eleanor discovers an illegitimate grandson in prison for armed-robbery she grits her teeth and does her duty—she gets him out. But being out of prison doesn’t instantly make Jackson part of the family. And as Jackson and his cousins struggle to find common ground, Eleanor steers Jackson away from befriending her other grandchildren. She only needs Jackson to keep them out of trouble—not be their friend. But Jackson and Dominique, the youngest Deveraux cousin, have other plans and, as his first Christmas as Deveraux arrives, Jackson sets himself on the path to fixing the Deveraux clan and getting the family he’s always wanted.