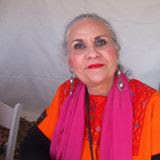 Casa Camino Real is a bookstore, art gallery and community resource center that celebrates literature and the arts in the borderland region of New Mexico, Texas and Northern México. Located in Las Cruces, New Mexico, 42 miles from the U.S./México border on the Camino Real and on the original Las Cruces townsite, we believe books are for everyone. When you enter our historic adobe, our motto is "This is the temple where books are sacred." We focus on Chicano/Chicana/Latino/Latina, Southwestern and Borderland literature but are building an impressive collection of books from New Mexico settler families.


This interview took place this summer 2017 in Las Cruces while I attended a writing workshop with the Chicana activist and writer: Denise Chávez. We sat in her bookstore and chatted like old friends, which I'm happy to say, we now are friends, comadres. She gave me more than an interview. She gave me a peek into her past. We laughed and laughed because Denise is very theatrical and very funny. I couldn't upload the video I took because I'm not that tech savvy; but here are the transcripts. Due to tech difficulties, namely I didn’t know my battery would drain so quickly, I wasn’t able to record the remainder of the interview; however, by answering a couple of questions and describing in great detail her stories, she answered many of my questions. Next time I meet an icon, I’ll be sure to have a backup battery.

D: Ten. In a way, it’s good, yes, and in a way, no, and this is the workshop we’ve done today. When is it good to speak truth? What is truth? On the one hand, I had to stand up for myself. She had stolen my prayer book. On the other hand, I didn’t have the compassion or understanding as a child to just say, “You know what? It’s okay.” And I never did speak to anybody about it. I wish I had been able to talk to my mother or somebody and say, “Look, Gloria, stole my prayer book. What should I have done? I had no one to talk to about those questions you have when you’re a young girl or a child. What was the right answer? I don’t know maybe I did need to confront her, because I had to speak up for myself, but did I? I don’t know. Now, I would just let her have the prayer book. So, whether it’s that or…
J: There are many kinds of betrayal.
D: Many kinds of betrayal. Dating your ex-boyfriend’s brother; or whatever the story is, you never know what that betrayal…or betrayal to yourself that’s the worst kind of betrayal when you disappoint yourself. I should have acted better. Why did I beat…why was I so rude and I have a tendency to be curt sometimes.
My mother was a no-nonsense person and sometimes I’m hard on people. I realize that my hardness comes from a wounded mother who was abandoned. My husband understands this, but it’s hard to be around a woman, who you gave gifts to, for Father’s Day. The check was never in the mail. My mother was always struggling to pay her bills. The bills were mounded high and it’s like I’m still living from my mother’s story of lack.
But it’s like you know you…lets change that story; because my mother, pobrecito, got three dollars here, five dollars there and she always had bills. I’m always ferreting out and paying this and doing that; so that sense of betrayal that you have there that you feel about yourself. Why can’t I make money? Is it that I’m living the story of my mother who never had anything?  And I realized maybe I am; maybe I’m living out the scenario of people that didn’t have much; and so you feel a sense of, you know…I’m a talented, creative person. Why can’t I make money? Because there are other things that are sometimes more important.
I’m very generous in our bookstore. Sometimes I find myself giving a lot of things away and hey, it’s okay; because here we are at this workshop... I’ve got a donation of count ‘em five fans. Before you came here I was missing three ceiling fans. These ceiling fans are new; that were donated, by friends. And then Manuela gave me a fabulous floor fan and another little fan that I have to put together. So, in the course of calling out to the Universe that I need fans, and it’s still hot; but we have fans; and instead of one fan, I have five new fans; so in a way, money is not everything. Fame and everything. I don’t know. I’m very rich.
J: On that note, I want to ask you what do you want your legacy to be? When you leave this world and people talk about you, what do you want them to say about Denise Chavez?
D: She was generous. She loved words. She loved culture, art, and she made a good cup of coffee; but more than that, I hope that I was able to…I feel that our community center is here to enlighten, empower, and inform people. Inform, empower, and enlighten. Hopefully there are a couple of people that felt some security in this place.
I refer to our bookstore as a sanctuary business; so I hope people come and remember that they felt comfortable here. Like I used to feel in my mother’s house. She made everybody…I remember she had a sign over the door that says, “May all guests be received as Christ.” She loved life. She was a very religious person. I might not have that sign, but I liked the beauty of it: May all guests be received here with goodness and light and love and with god-ness and then she had a little sign over her desk; and it makes me very emotional, and I think about it too...Do I oppress others with my gloom? Do I oppress others with my gloom? In other words, pick it up, be cheerful.
I sometimes fall into darkness and I get depressed; but I hope that people will remember that I had joy and that I was happy; and that when we sat here and drank our coffee, we were…that you felt comfortable; and that the characters in my book, and I talk about my writing, brought you some happiness and laughter and maybe a few tears. Let’s cry a little bit. Because it’s very good to cry and we did in this workshop. We’ve had a wonderful time of laughing and we cried a little bit too.

J: Well the next question is a little bit of trivia. Let’s go back to the seventies. What were you wearing and what music were you listening to at that time? I see you have a huge vinyl collection.
D: Well, I love the Beatles and George was my Beatle. I graduated from high school in ’66 and I’m not sure when the Beatles came to the U.S. It was in high school cause my dad got tickets It was maybe when I was a junior or sophomore. Something like that. My dad got tickets for the Beatles at Red Rock Amphitheatre; and we went there, camped on the campground. We sat in the third row when the Beatles came. And who’s the opening act? Let me think about this. Oh, god. Now I can’t remember; but it was a wonderful opening act.
J: When you remember you can send me an email.
D: And I will. But here’s the thing. We were there. My dad got tickets. My oldest sister, Foddy and my sister, Margo, a cousin of my brother-in-law’s, and we were all there screaming. I’ll never forget looking back up…so I might have been enjoying the Beatles.
My mother was a character. As devout as she was, but she would take us out of school because she drove us, picked us up out of school; so we could hear the Dave Clark Five in Albuquerque; and so we’re driving on a school day to hear Dave Clark Five! She was…she…they loved music and they…I remember my mother loved, The House of the Rising Sun; and she never knew that it was about a bordello. (Laughter) No. She just loved the music. She just thought it was fabulous. So, I grew up with people that loved music. I was probably listening to a lot of music.
I had a flip. And I’ll show you my flip. It was fabulous. Yes, I curled my hair and I had big rollers; but I had such an incredible flip and a wonderful hairdo and I was looking very mod, very hip. Minis. And my mother made a lot of our clothes so my sister and I looked…she would go into a store and see a pattern and then she’d make her own patterns.
So, we were always muy modern whatever that style was; we looked good. We were cute girls and so here I was with my flip and my sister had a fall…I never did…we wore wiglets. I wore false eyelashes and then sometimes I would fall asleep. We used to go drinking in Juarez dancing more than anything else. There was a group of us that loved to dance so we’d go dancing and I remember coming home and falling asleep with my false eyelashes on and I couldn’t open my eyes in the morning.
So, I was just an interesting, attractive…and thoughtful young woman. I was working as a waitress. I started my career as a waitress. And I worked as a waitress for about six years. I loved working with people. And it was one of the best jobs I ever had; because the training…for a writer…to learn service. To learn about people. I was in la posta a Mexican restaurant; so I was learning about life, people. I worked in the hospital; and it was good. There were years of training and understanding what the world was about. It wasn’t easy. My mother was very strict; but in retrospect, I realized, that was very good.
J: Okay. The next question is who were you reading? Who were the authors or the names of the books that you were reading in the seventies?
D: I read a lot and I was studying…by then I was at New Mexico State University; and I was reading a lot of American classics. I was introduced to Garcia Lorca as a freshman in college and he stayed with me from all time. My first poetry teacher, Keith Wilson. I was in theater; so a lot of the people that I studied were playwrights: Lillian Hellman, Chekhov. I was in many of the plays; so I acted in most of Chekhov…our director was a Russian man, so we would do plays, Chekhov I was in his plays: Uncle Vanya, Ivanov, and the Cherry Orchard; and so forth, but he was doing very interesting things during…we did world drama; we did restoration drama and I never forgot that I wore a white wig and we did eclectic interesting work. el fin.